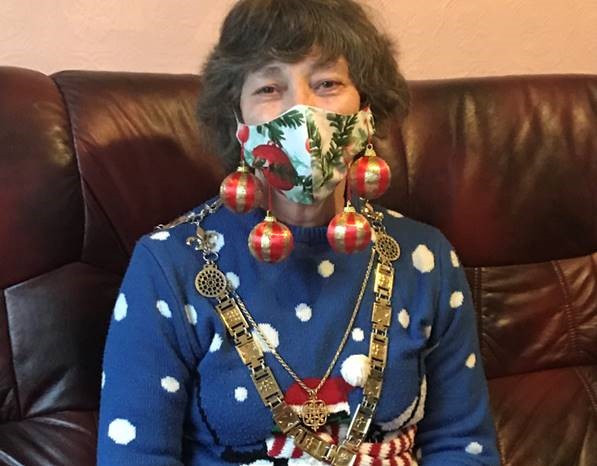 She is asking residents to design their own mask to bring a little fun and joy to the season of goodwill.

To get the contest underway, Cllr Smith has made her own colourful mask which has four bouncing baubles attached to it.

The competition is open to people of all ages with the winner receiving a generous gift voucher.

Anyone who wishes to support the project is invited to make a donation to the Mayor’s charity, St Albans and Hertsmere Women’s Refuge (SAHWR).

Entrants should email a photograph of their creation to mayoralty@stalbans.gov.uk by Sunday 20 December along with their contact details.

The winner will be announced the following day by the Mayor who will act as judge.

Photographs of the most compelling designs will be published on SAHWR’s Facebook page: @StAlbansandHertsmereWomensRefuge.

We are all likely to spend more time at home during the festive season than normal even though the lockdown has eased.

I thought it would be a good idea to have a festive facemask competition to give people something fun to do with their spare time.

It will encourage people to give vent to their creative talents while also reminding them to stay safe from COVID-19 by wearing a mask when necessary. I’m particularly hoping that we get a lot of entries from our younger residents.

I’m also asking people to think of others by making a donation to my charity, the local women’s refuge.

Demand for the refuge’s services are at a high level as domestic abuse cases have risen during the lockdown and often rise during the holiday season, so this is a cause that needs help urgently.

Picture: The Mayor in her festive facemask.