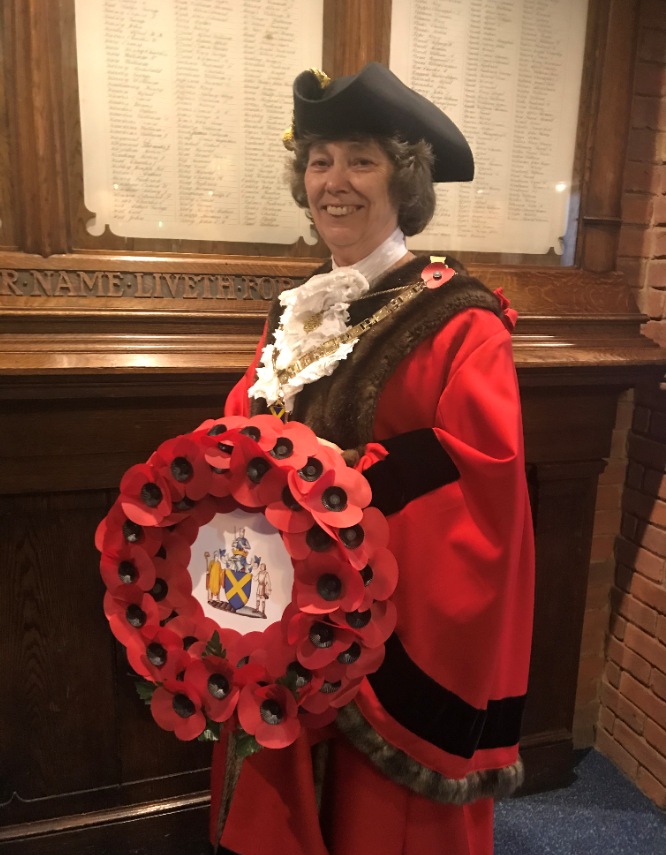 St Albans’ Mayor has invited residents to pay their respects to Britain’s war dead on Remembrance Sunday by watching an online service.

It was held in the Council Chamber where there is a wood-panelled war memorial paying tribute to many St Albans citizens who were killed in action. It is available to watch here.

The decision to record a service was taken due to the cancellation of the annual Remembrance Sunday parade in St Peter’s Street that is normally followed by a wreath-laying ceremony at the City’s War Memorial.

Rules on gatherings and social distancing during the COVID-19 pandemic meant these events, which normally attract large crowds, could not go ahead.

The parade usually features representatives from the Royal British Legion, the Air, Sea and Army Cadets, the Guiding and Scout movements and the Police, Ambulance and Fire services.

Tommy silhouettes have been placed at the Memorial and at the West door of the Cathedral.

Remembrance Sunday is one of the most moving and important occasions in the District and the Council plays a major role in its organisation.

I was deeply saddened by the fact the annual parade could not be held this year because of the pandemic.

However, people can still take time to pay their respects and remember the brave servicemen and women who lost their lives or were injured while serving in the armed forces.

I’m sure our whole community will observe the two-minute silence on Sunday or Wednesday and I hope many people will take up my invite to watch our special online service.

This is our way of recognising the debt we owe to the men and women who sacrificed their lives in the defence of this country. We must always remember them.

St Albans Cathedral will be live streaming its Remembrance Sunday service on Sunday 8 November from 10.50am. It can be viewed here:https://youtu.be/he8xS2vlK-c.

People can also mark the day by taking part in a Remember at Home activity such as marking the silence, placing a poppy in a window or a wreath on their front door.

Further information about this initiative is available here: https://www.enjoystalbans.com/remembrance-day-2/.

Any group or individual who would normally lay a wreath at the City’s War Memorial or elsewhere can still do so privately up until Wednesday 11 November, Armistice Day.

If you would like the Council to include a short clip of your wreath laying on the webpage above, you should email a video of a maximum 15 seconds to mayoralty@stalbans.gov.uk.

Anyone holding a Remembrance event should follow Government guidance on Covid-19 safety. More information is availablehere.

The Mayor will attend the War Memorial on Wednesday 11 November to mark the two-minute silence in a private ceremony.

Picture: the Mayor at the Civic Centre War Memorial.