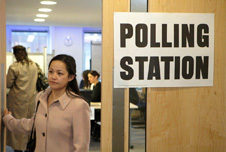 Voters go to the polls on Thursday 2 May

Voters will go to the polls on Thursday 2 May for elections to St Albans City and District Council.

Polling station. Photo reproduced with kind permission of the Electoral Commission.
Twenty-one of the 58 District Council seats are up for election and there are 85 candidates in total.

More than 108,309 people are registered to vote with around 18,400 having arranged to vote by post and 158 having appointed proxies to vote on their behalf

The District Council elections are held on three years out of every four with Councillors serving four-year terms.

One seat in each of the 20 wards is up for election this year with the winning candidate elected to May 2023.

There is an additional seat in the Sopwell ward, following a resignation, that runs until 2022.

There are 74 polling stations at 52 locations across the District and they will be open from 7am to 10pm.

The Council currently has a Conservative Party majority and its political composition is: Conservatives, 30 seats, Liberal Democrats, 17, Labour, six, Greens, one, independents, three, and one vacancy.

I would like to remind everyone that polling day is almost here. We want to make sure that everyone knows how they can cast their vote and have their say on Thursday 2 May.

If anyone has any questions then there is lots of information available on the Council’s website or they can contact our electoral services team.

A list of the election candidates and other information is available here: www.stalbans.gov.uk/council-and-democracy/elections/May2019elections/default.aspx.

The Council’s Electoral Services team can be contacted on 01727 819294 or email elections@stalbans.gov.uk.

The results are due to be announced from around 2am on Friday 3 May.  They will be posted as they happen on the Council’s website at www.stalbans.gov.uk/elections with partial results appearing on the Twitter feed, @StAlbansCouncil.

Here is some essential information about the elections: