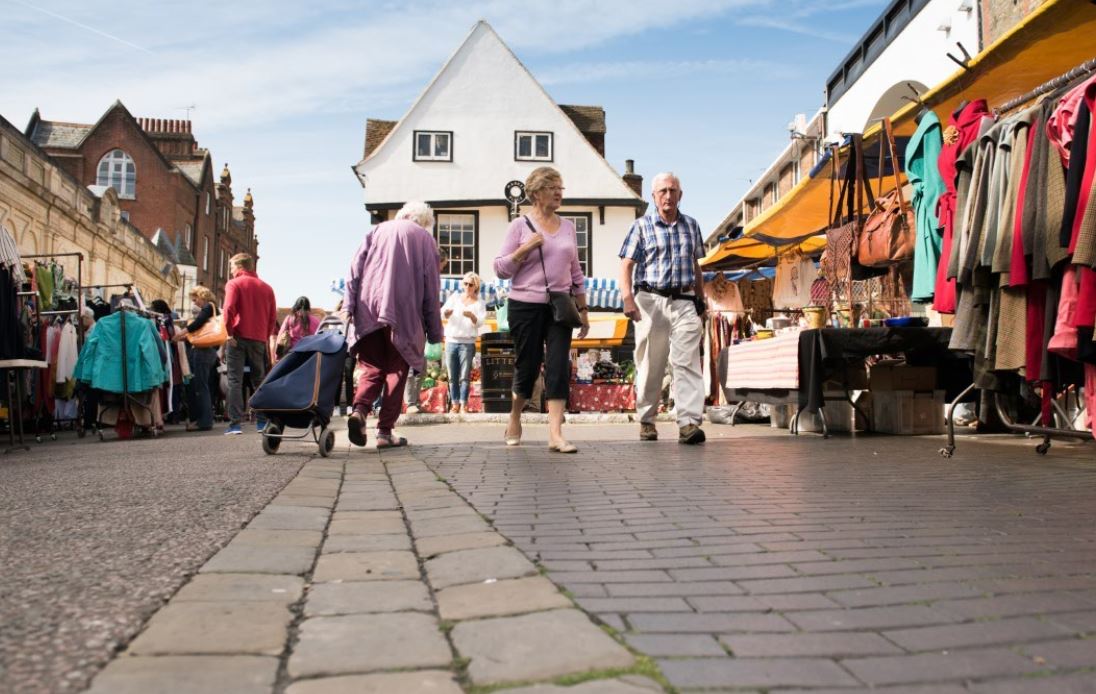 Charter Market meeting to be held in public

A meeting on the future of St Albans Charter Market is to be held in public with traders and residents welcome to attend.

St Albans City and District Council owns the market and has set up a working group to examine options for its development.

The group would normally meet in private, but its second meeting will be open to view because of intense public interest.

Among the key issues the group is looking into is whether the market should become gazebo-only permanently or revert to traditional stalls.

The market has been kept open during the Covid pandemic by introducing gazebos which the traders are required to provide as well as put up and dismantle.  This has reduced the risk of surfaces being contaminated by the virus.

Previously, a team of Council workers was employed to erect and take down stalls which were stored at its depot.

Presentations will be made to the group’s next meeting at 6pm on Tuesday 28 September to outline the advantages and disadvantages of the gazebo and stall options.

Residents will be able to listen to the discussions although they will not be able to contribute to the debate unless they are a designated speaker.

They will be able to watch a webcast which will be made available here. The webcast will remain available to view after the meeting.

The working group was formed by the Council’s Business and Regeneration Committee with all four political groupings represented.

Normally, our meetings are being held in private but members agreed with my suggestion that this one should be held in public in view of the huge interest there is in the Charter Market’s development.

This has become one of the most closely-followed and contentious issues in the District for some time, so it is only right that we allow an opportunity for the public to participate in and listen to the debate as we examine all options.

A great deal of heat has already been generated about the proposed market changes but not always enough light. I want to pause now to allow time for a more reasoned debate about the market’s future.

Our first meeting agreed a road map with a process and timetable for finally resolving this issue by early February 2022 including a decision whether or not to hold a formal gazebo pilot this winter.

“We also wanted to reassure traders that we are listening to their concerns about the erecting and dismantling of whatever equipment is finally decided and that the Council will continue to take its responsibilities in this regard very seriously.

At this next meeting I am keen to allow a range of different opinions and options to be expressed before we decide our recommendations to the Regeneration and Business Committee.

We will have representatives of the traders, the Business Improvement District, retailers, the Civic Society and residents speaking from their point of view about the advantages and disadvantages of either traditional stalls or gazebos or why they don’t mind whichever is chosen.

I urge anyone who is interested in the market, including traders, shoppers and local businesses, to follow the meeting online.

There will be a further meeting on Tuesday 19 October when the group is due to decide on the date of a possible pilot scheme of a gazebo-only market. This will be to test its popularity and long-term viability among traders and shoppers.

The group will also meet on Tuesday 3 November when it will finalise its recommendations which will be put to the Committee’s meeting on Tuesday 23 November.

We are moving on swiftly with our task of producing a strategy for delivering a Charter Market that I am determined will be attractive, sustainable and worthy of our City’s heritage and future prosperity.

Following the presentations on the 28th September I am hoping that the working group will come to a consensus on the best way forward on that and other associated market issues such as a possible pilot, health and safety concerns and its uniform appearance.