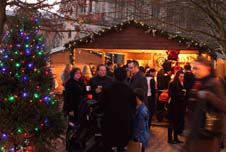 Visitors to the Christmas Market in St Albans injected almost £1 million into the rest of the local economy, a study has revealed.

The money, additional to what was spent at the Market, went on purchases in shops, restaurants, cafes and bars.

The University of Hertfordshire surveyed the visitors on the Council’s behalf to look at their activities in depth.

They found 47% had gone to St Albans specifically for the Market, boosting the overall number of City Centre visitors during the festive season by almost 50,000.

That meant local businesses benefited from additional income of around £955,150 during the four weeks the market was on.

However, a separate analysis of the visitor figures using the Cambridge Economic Impact Model suggests the boost could be much higher at £2.9 million. (1)

The model is a tool widely used across the UK to measure the volume and value of tourism in a given area.

It has its own evaluation, based on other surveys, on the average spend of particular groups of people attending an attraction like the market.

These include people from outside and inside an area as well as those staying overnight in hotels.

After the relevant data was fed into the model, the £2.9 million figure was produced.

Last year’s market in the Vintry Garden boasted more than 30 wooden chalets selling a wide range of festive gifts, stocking fillers and decorations as well as arts and crafts. There was also a Santa’s grotto and a live entertainment venue surrounded by a food court.

Councillor Beric Read, the Council’s Portfolio Holder for Business and the Community, said:

The Christmas Market is a key component of our visitor economy strategy. It attracts people who make use of all the other attractions available in the City Centre.

The study by our partners from the University of Hertfordshire shows that this is very much the case with the market attracting some 50,000 extra visitors.

Whether the figure for additional income is £1 million, nearly £3 million or something in between, there’s no doubt that the market gives a significant boost to businesses elsewhere in the City Centre.

This is money that would not be otherwise spent in our shops and restaurants and it helps grow the local economy.

Research has also shown that the Christmas Market has helped promote the City.

There were 38 mentions of St Albans relating to the visitor economy from July to December 2017 in the national media with 33 of those focused on the Christmas Market.

These were positive stories about the District that were seen by an estimated 3.2 million readers online and in print. (2)

1. For more information about the Cambridge Economic Impact Model, please see: www.visithertsbusiness.co.uk/insights-and-resources/hertfordshire-s-cambridge-economic-impact-model/. Figures used to estimate additional spending, based on Visit Herts research, were £15 per resident visitor, £25 per day visitor and £175 per overnight visitor.