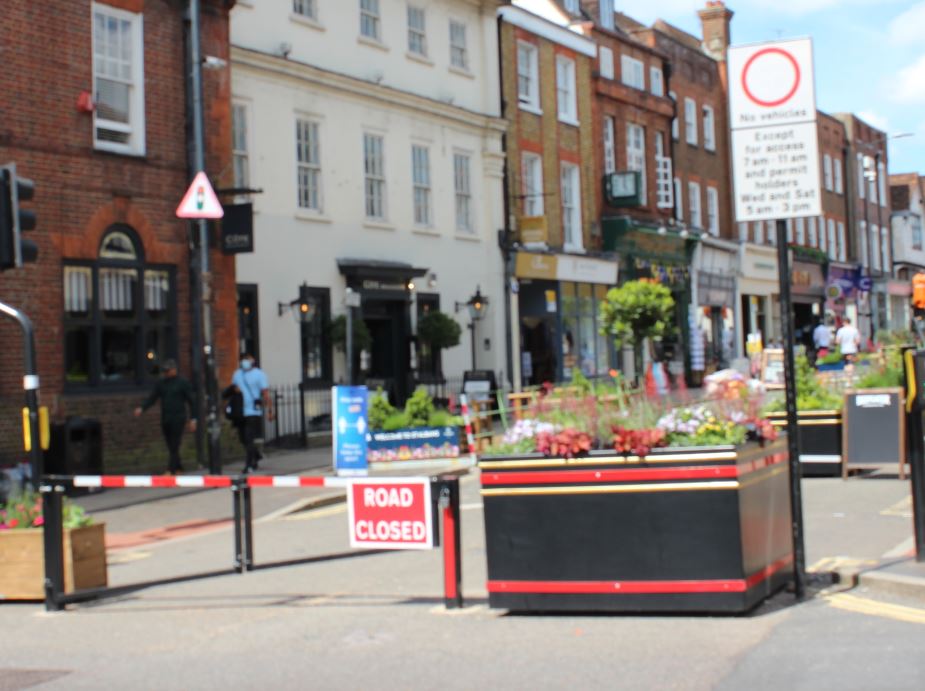 Two options for the continued pedestrianisation of parts of St Albans City Centre should be trialled over the next year, Councillors have recommended.

In the meantime, the current pedestrianisation of the High Street and George Street along with a section of Verulam Road should be halted with the roads reopened to traffic.

These three areas along with Market Place were closed to vehicles at the height of the COVID-19 pandemic.

Hertfordshire County Council (HCC), the highways authority, made the changes to create more space for shoppers and visitors to socially distance.

With restrictions having eased, HCC is investigating whether a pedestrianisation scheme should be made permanent and have asked St Albans City and District Council (SADC) for their views.

SADC’s Public Real Committee has now recommended that two of three possible options should be trialled next year with the public consulted about their impact.

The Committee, at its meeting on Monday 13 December, also recommended that trials did not take place until April next year at the earliest, following the completion of the first stage of Affinity Water works on Batchwood Drive.

The pedestrianisation of parts of the City Centre has been a contentious issue that has prompted considerable debate.

There have been legitimate concerns expressed about traffic displacement. That is why the Committee was clear that High Street/Verulam Road should be reopened until the first stage of Affinity Water's works on Batchwood Drive are completed.

'At each stage of the trials there should be rigorous analysis of the impact on the highway network and air quality.

There are also a range of views within the business community.  Some businesses are adamantly against pedestrianisation but many others have voiced strong support.

In an extensive survey last summer many residents welcomed the environmental improvements associated with pedestrianisation. That is why the Committee agreed that the pedestrianisation of Market Place should be made permanent.

The two schemes which the Committee has recommended should be trialled for a minimum of three months are:

Phase One: a continuation of the current arrangements with George Street, the High Street, Market Place and a small section of Verulam Road closed to traffic except for deliveries, disabled parking and residential access at set times. There will be some enhancements including greater access for cyclists and an improved turning circle for vehicles at the junction of George Street and Verulam Road.

Phase Two: the same as phase one, except the High Street and Verulam Road will open to two-way traffic on weekdays and be closed on weekends only.

The Committee recommended that phase two should start first and called for a third option put forward by HCC to be abandoned.

This was the same as phase one, except the High Street would have been closed on weekends only and open one-way to eastbound traffic moving from Verulam Road to Chequer Street on weekdays.

Its views will be sent to the St Albans City Centre Project Board which HCC has formed to consider pedestrianisation.

The Board consists of three County Councillors whose divisions are most affected by pedestrianisation along with the HCC’s Portfolio Holder for Highways and Committee Chair Cllr Rowlands.

At each phase of the trial, HCC will undertake a public consultation to understand the views of residents, businesses and visitors about the different schemes.

The Public Realm Committee also recommended that the Project Board should involve the Combined Residents Association in their work as well as the Hertfordshire Fire and Rescue Service to ensure emergency vehicle response times were not impacted.

Although the final decision on pedestrianisation does not rest with us, I am sure our views will carry considerable influence with the Project Board.

We will be watching the trials progress and will be taking a keen interest, in particular, on the results of the public consultation. It is the public’s response that should be the major factor in all of this.

The full details of each scheme can be viewed in the Committee papers here.