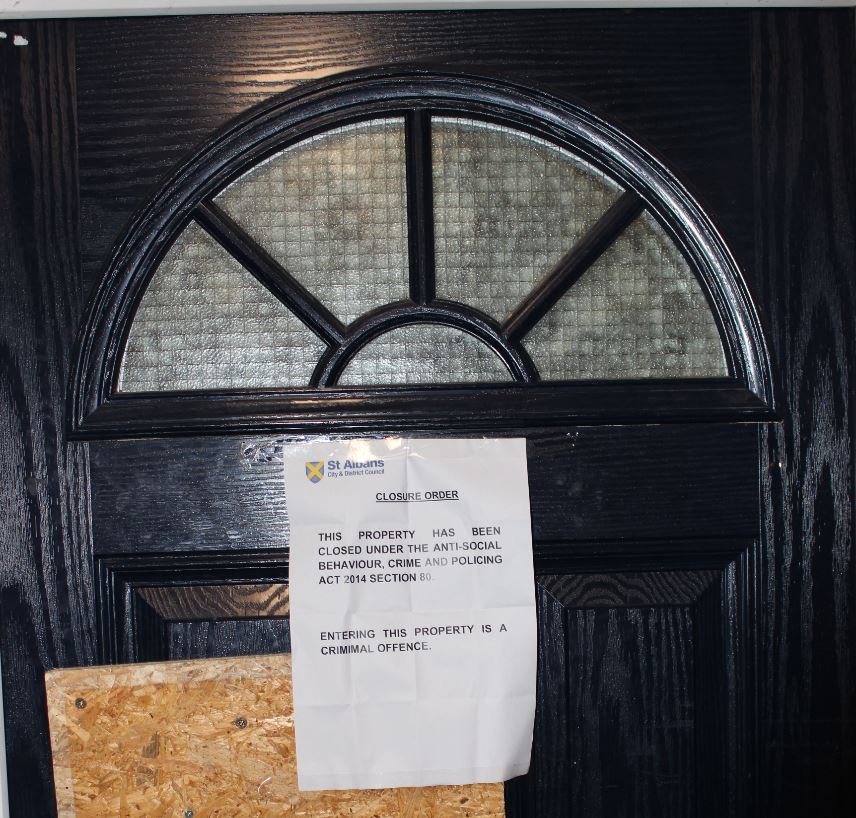 A closure order has been served on a property in St Albans that has been linked to drug dealing and antisocial behaviour.

The tenant has been ordered out of the house which will now be sealed off for three months.

Anyone who enters the premises in Ladies Grove, Batchwood, during that time faces being prosecuted.

St Albans City and District Council, which owns the house, obtained the closure order from the City’s Magistrates’ Court with support and evidence form Hertfordshire Police.

The Council’s Community Protection Team and the Police have received numerous complaints over several years about activities at the property.

This has led to arrests and convictions for Class A drug production and supply offences.

A closure order was gained last year, but it allowed the tenant to remain in the property.

After complaints continued, the new closure order was obtained by the Council. It now plans to ask the Court for permission to regain permanent possession of the property.

Our Community Protection Team together with the Police have been dealing with complaints from local residents about activities at this property for some time.

Our successful application for a closure order shows we are determined to look after our residents by taking firm action against crime and antisocial behaviour.

The tenant has been removed and the premises sealed off so that it will no longer be a source of concern.

We are now looking to regain full possession of the property so that it can be rented out to someone on our social housing register who is waiting for a permanent home.

We have been working closely with the Council, safer neighbourhood team and both Operation Scorpion and Mantis officers, who were involved in warrants at the address.

“We received numerous calls from residents who were ‘fed up’ and whose lives had been disrupted by ongoing antisocial behaviour.  Having updated them about the closure order, they are ‘delighted’ and ‘pleased to get their lives back.’

Two women and a man found at the property when the closure order notice was put up were arrested as they had breached the conditions of the closure order.  They have been released under investigation.

Closure orders, prohibiting access to a property for a specified period, were introduced in the Antisocial Behaviour, Crime and Policing Act 2014

They can be issued by the Courts when there has been disorderly, offensive or criminal behaviour at the property concerned.

If you have information about drug use and anti-social behaviour in your local area, report information online at Hertfordshire Constabulary, speak to an operator in the Force Communications Room via the online web chat at herts.police.uk/contact or call the non-emergency number 101.

If a crime is in progress or someone’s life is in danger, call 999 immediately.  Alternatively, you can stay 100% anonymous by contacting the independent charity Crimestoppers on 0800 555 111 or via their untraceable online form at crimestoppers-uk.org.