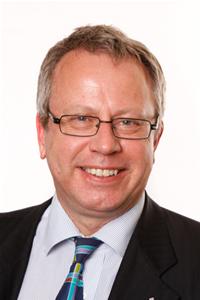 Councillor Chris White has been confirmed as Leader of St Albans City and District Council for the second year in a row.

He was elected at a meeting of the Full Council on Wednesday 21 May which was held online to maintain social distancing.

Cllr White announced he was not making any changes to his six-strong Cabinet, although some of the titles have been amended.

He also revealed that he was examining a change to the Council’s structure from a Cabinet system to a Committee one.

A cross-party task and finish group will be set up to review the Council’s Constitution and report its findings later in the year.

Any change could result in more decisions about the Council’s operations being taken by Committees rather than by the Cabinet or one of its members.

Cllr White said after the meeting:

I am delighted to have been elected Leader again at what is a particularly challenging time for local authorities across the country.

In the coming year, much of our focus will be on the Council’s finances as we battle against the impact of the Covid-19 pandemic which has reduced our revenues and added to our costs.

However, we remain determined to deliver on our priorities that include tackling the climate emergency and delivering more social housing.

I have also initiated a review of our structure as I believe a Committee system, like that used by neighbouring Three Rivers District Council, may be a better way of conducting our business.

Council also agreed to the membership of its 14 Committees, three Joint Committees, two Consultative Forums and four task and finish or working groups.

The Council elections that were due to take place earlier this month were cancelled by the Government because of the Covid-19 pandemic.

They will be held next May with those Councillors whose term was due to expire being given another year.