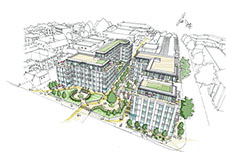 Enhancements to an ambitious development in the heart of St Albans are being drawn up to create more affordable homes and business space.

St Albans City and District Council also intends to improve the look and quality of the new buildings planned for the site beside the Alban Arena.

Local groups and interested individuals recommended many of the improvements at a community design review, an independently-hosted workshop.

Under new plans, the number of affordable and private sale homes could rise and the amount of commercial space could increase. The number of car parking spaces could also go up.

The Council is carrying out a circa £60 million redevelopment of the area known as the City Centre Opportunity Site South (CCOS South).

An existing planning permission, gained by private firm Angle Property, allows for the construction of two separate buildings of up to six storeys for residential and commercial use.

Now valuation, design and engineering contractors are examining the new ideas and aim to produce enhanced plans within the next few months.

These will include a cost analysis to ensure the scheme remains economically viable.

If the Council decides to go ahead, the new designs will undergo a further review and will require a new planning application.

In the meantime, preparatory work to remove asbestos is taking place before the former police station and NHS clinic are demolished in June.

Among the recommendations to emerge from last month’s design review were the:

An update on progress with CCOS South is to be given to a meeting of the Council’s Cabinet on Thursday 28 February.

This is one of the most exciting and biggest developments the Council has ever undertaken.

It has the potential to completely transform a rundown part of the City to the benefit of all residents as well as creating much-needed new business space and housing.

We are determined to make sure the development is of the highest quality possible and greatly adds to the vibrancy and character of St Albans.

For that reason, we have taken a pause to reflect on the design and consider improvements rather than rush things through. I am confident that if we can make  the costs work, this will result in a development that the community can be truly proud of shaping.

To view the Cabinet papers, including the CCOS South report, please see: bit.ly/2XmVJtl