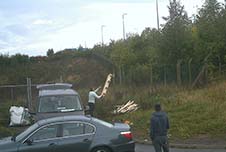 A man who allowed his van to be used by fly-tippers was ordered to pay almost £700 in fines and legal costs after he was prosecuted by St Albans City and District Council.

He admitted letting his vehicle be used for the illegal transportation and fly-tipping of rubbish in Hogg End Lane, near St Albans.

Damian said, in a written statement to St Albans Magistrates’ Court, that he had been paid £40 by two men to use the Volkswagen Transporter.

They had told him they wanted “to pick some items up” from Chelsea, London.

He said that the vehicle was then used without his knowledge to take and dump two electric heaters and some wood by the roadside.

“I deny being present at the scene or disposing of waste myself,” he said.

CCTV footage from a camera had captured the van and a BMW car parking in the fly-tipping hotspot on 16 September 2017.

One man appeared to act as a look-out while two other men then fly-tipped the rubbish onto the verge.

Council officers found the van was a rental vehicle and traced Damian who was in control of it at the time.

He was interviewed under caution and initially refused to identify the individuals involved in the fly-tip. He later revealed the name of one man he had loaned the van to, but by that time he had moved to Romania.

Magistrates fined Damian £100 at the hearing on Wednesday 1 May and ordered him to pay the Council £407 compensation for waste removal costs and a £30 victim surcharge.

He was also ordered to make a contribution to prosecution costs of £150, making a total sum of £687.

This is the third successful prosecution for a fly-tipping offence that we have brought this year.

It demonstrates our determination to deter fly-tipping by tracing those responsible and taking action against them. It also shows that the measures we are taking to combat this anti-social crime, such as the use of cameras in hotspots, are effective.

In this case, the person taken to court did not carry out the fly-tip themselves but allowed others to use his rental vehicle to do so.

It is a reminder to people that they have a legal responsibility to ensure that waste is only picked up for disposal by someone who is licensed to do so.

The Council is working with local authorities, the police and other agencies through the Hertfordshire Fly Tipping Group to combat the crime

For more information about their work, including the Let’s SCRAP Fly-tipping campaign, please see: www.hertfordshire.gov.uk/flytipping.