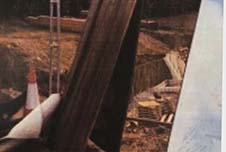 Two fly-tippers have been ordered to pay a total of £1,000 for dumping unwanted furniture and other material in St Albans.

Khalid Miah, 22, and Imad Benballah, 48, both admitted an offence after prosecutions were brought by St Albans City and District Council.

Miah left mirrored doors, parts of a wardrobe, carpet underlay and cardboard packaging at the entrance to a building site in Waverley Road.

The site foreman reported the fly-tip to the Council and a resident came forward to provide helpful CCTV images.

Officers traced Miah, of Doggetts Way, St Albans, with the help of an address that had been left on packaging found at the scene.

Miah admitted a breach of the Environmental Protection Act in August last year at a hearing at St Albans Magistrates’ Court.

He was fined £320 and ordered to pay compensation to the Council of £191 to cover the cost of removing the waste.

Magistrates also ordered him to pay £220 toward the Council’s legal costs and a victim surcharge of £32, making a total of £763.

Solicitor Oliver Mather, in mitigation for Miah, said his client apologised for his actions and had pleaded guilty at the earliest opportunity.

In a separate case, Benballah admitted fly-tipping a sack of waste and a cardboard box near some Council bins.

He was caught on CCTV committing the offence in Drovers Way, St Albans, in December 2017.

Benballah, of Ninian Road, Hemel Hempstead, was fined £120. He was ordered to pay £97 waste removal compensation and a £30 victim surcharge, making a total of £247.

Both prosecutions were held at the Magistrates’ Court on Wednesday 27 February.

Fly-tipping is an anti-social crime that spoils the landscape and costs the Council significant sums to clear up.

These successful prosecutions show we will not tolerate this kind of offence and will seek to trace those responsible and take action against them.

In the case of the building site fly-tip, I would like to thank both the site foreman for reporting it to us and the resident who captured the incident on CCTV and gave us the evidence.

This is an example of how the Council needs to work together with the community to deter the crime of fly-tipping by tracing offenders and prosecuting them.

Two £400 fixed penalty notices for fly-tipping have been issued to offenders since the start of this year.

One was for the dumping of a freezer and cardboard packaging next to a St Albans primary school. The other was for five refuse bags and cardboard left by a rural road in Kinsbourne Green.

The Council is working with local authorities, the police and other agencies through the Hertfordshire Fly Tipping Group to combat the crime.

For more information about their work, including the Let’s SCRAP Fly-tipping campaign, please see: www.hertfordshire.gov.uk/flytipping.

To keep up to date on social media with the work of the group, use the hashtag #SCRAPflytipping.