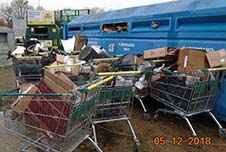 Two flytippers have been ordered to pay £579 in fines and costs after eight shopping trolleys full of builders’ rubble was dumped at a St Albans’ supermarket.

Giorgo Nasso, 43, and Tzortzi Viezi, 43, both pleaded guilty to one offence under the Environmental Protection Act 1990.

The pair, both directors of the Greek restaurant Souvlaki, in Hatfield Road, St Albans, admitted failure to properly dispose of controlled waste.

They had allowed two other men working for them to dump the material, contained in black bags and boxes, beside the recycling area in a nearby branch of Morrisons.

Nasso and Viezi were prosecuted by St Albans City and District Council who had investigated the flytip of December last year.

Council officers had examined the illegally dumped waste and were able to trace it to the Souvlaki restaurant where building work was being undertaken.

Both Nasso and Viezi were interviewed under caution and later summoned to appear at St Albans Magistrates Court on Wednesday 18 December.

In mitigation, the Court heard both men had co-operated with the inquiry and entered swift guilty pleas.

Councillor Chris White, the Council Leader and Portfolio Holder for Climate and Environment, said: after the hearing:

This was another successful prosecution that we have brought for flytipping, the fourth this year.

Flytips are a blight on our community as they are a hazard, an eyesore and cost Council Taxpayers a considerable amount of money to clear up.

We are determined to clamp down on this crime by tracking down offenders and taking tough and appropriate action against them.

In this case, we had the directors of a restaurant allowing the flytipping of a considerable amount of builders’ waste. That is not how we expect businesses in the District to behave.