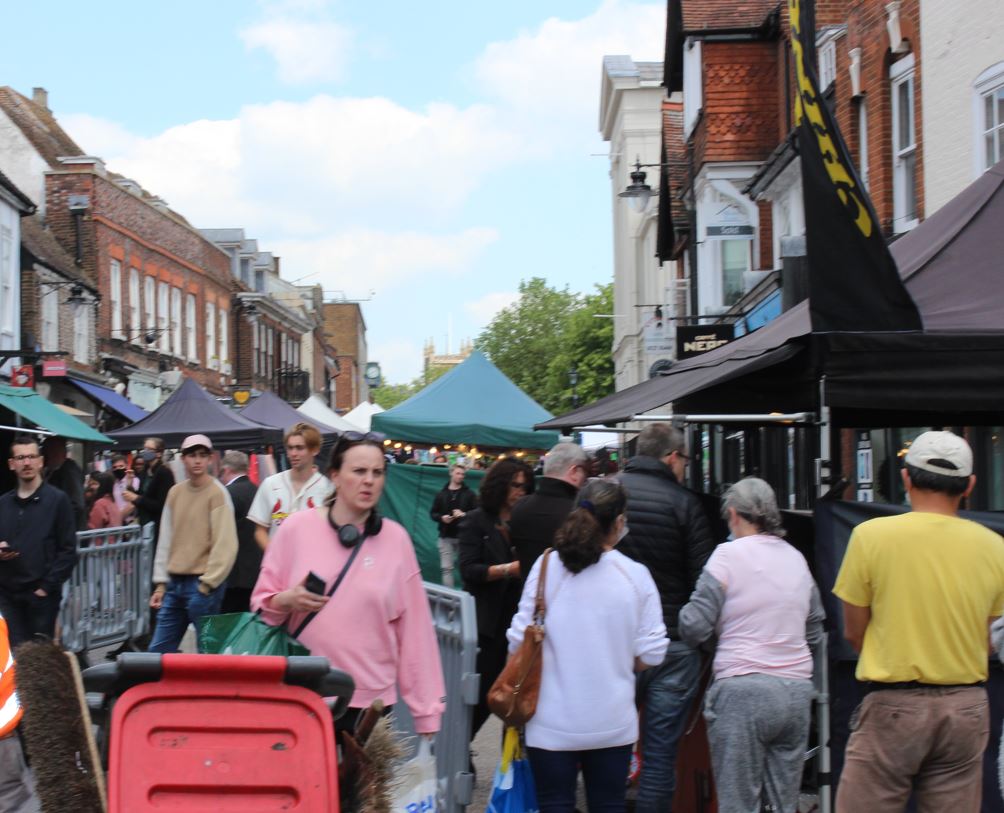 The core of St Albans historic Charter Market is to become a mix of traditional market stalls and gazebos – all in the City’s famous blue and yellow colours.

St Albans City and District Council, which manages the market, will provide the equipment as well as hire a contractor to set up and dismantle the structures.

On the market’s fringes, some traders will be allowed to set up their own gazebos or use trailers for takeaway food and other produce.

In another initiative, the Council will look at the implications of outsourcing the operation of the market to a charity or private operator.

The proposals were unanimously approved by a meeting of the Council’s Regeneration and Business Committee at its meeting on Wednesday 2 February.

Members accepted the recommendations of the cross-party Markets Task and Finish Group which has been examining the twice-weekly market’s future.

Final decisions are subject to an appraisal of the costs involved following a tendering exercise to market operators as well as the development of a three-year business plan to ensure long-term sustainability.

There will also be further consultation with all interested parties including traders.

Councillor Robert Donald, Chair of both the Committee and the Working Group, said:

I am delighted that we have finally agreed a cross-party vision for the future of our wonderful and historic Charter Market that we can all work towards.

The market, like many other Council activities, was badly hit by the pandemic, prompting us to consider making permanent changes to the way it is run.

Developing these proposals has been an exhaustive and complex task as we have had to take account of many issues, some of them quite unforeseen, as well as differing opinions among traders, the public and District Councillors.

We have listened intently to people’s views, debated the issues intensively at seven Task and Finish Group meetings and finally arrived at a set of proposals that we can all get behind.

The revitalised market, consisting largely of stalls in St. Peter’s Street and gazebos outside the Museum in matching St Albans colours, will give our much-loved Charter Market a strong identity and image that will continue to attract thousands of residents and visitors.

Prior to the pandemic, the market consisted of traditional stalls that were put up and taken down by a Council workforce.

To allow the market to remain open during the public health emergency, traders were required to bring, set up and dismantle their own gazebos which were not required to be in uniform colours. This special measure reduced the risk of surface contamination and the spread of the virus.

The Council has since explored the options of making permanent changes including the possibility of a gazebo-only market.

The Task and Finish Group’s recommendations, which were approved, included:

Although we have taken a view on the important issue of the market’s infrastructure, we now need to look in detail at how the market is best managed in the years ahead.

We will be obtaining quotes as soon as possible for the erecting and dismantling of the stalls and gazebos and the renovation of our own market equipment to enable the new Charter Market to start this summer.

The aim of our three-year business plan is to achieve a break-even position within two years and then return the market to profitability again as quickly as possible after that.

We are open to the idea of an experienced private operator being involved or of a special charity taking it over, possibly as a means of raising funds for good causes.

These are issues which we will examine in depth as we create a post-pandemic Charter Market that will meet the needs of traders and appeal to all our residents for years to come.

I am planning to talk with traders and explain the plan unanimously agreed by the Regeneration and Business Committee to restore and revive our Charter Market at the next scheduled markets team meeting on the 25th February.

I have invited representative opposition Councillors to come with me to this meeting as a demonstration of the cross-party support there is to stop criticising what is wrong with the market and for everyone to get on with making it great again and even better than it was before.

I am expecting they will have a few questions for us all to answer then!