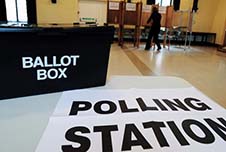 A total of 73,721 people are eligible to vote in the St Albans Parliamentary constituency at next week’s General Election.

And 76,321 can do so in the Hitchin and Harpenden constituency with the country going to the polls on Thursday 12 December.

The deadline to register to vote was midnight on Tuesday 26 November.

Some 13,757 postal votes have been issued to voters in the St Albans constituency while the figure for Hitchin and Harpenden is 15,715.

The deadline for applications for a proxy vote was 5pm on Wednesday 4 December although it is still possible to apply for an emergency one until 5pm on polling day.

A proxy vote is where someone votes on someone else’s behalf. To apply now, there has to be a good reason such as illness.

Those voting in person on the day will do so at one of 51 polling stations in the St Albans constituency or one of 60 in the Hitchin and Harpenden constituency.

There are changes to four of the usual polling stations in St Albans: St Peter’s School is replaced by the Methodist Church Hall, Marlborough Road.

Poll cards sent to voters affected by the changes contained details of the new venues.

The count for both constituencies will take place at the Batchwood Sports Centre, St Albans, after the polls close at 10pm. The results are unlikely to be declared around 3.30am the following day.

The General Election is very close now and final preparations are well underway. It is a major organisational challenge, but I am confident we are equal to it.

Around 150,000 people in the two constituencies are eligible to vote and I urge them all to do so and have their say on who should represent them in Parliament.

Here is some essential information about voting procedures at the General Election:

The Council’s Electoral Services team can be contacted on 01727 819294 or email elections@stalbans.gov.uk.

Further information about voting is available on the Electoral Commission’s guide to voters, www.yourvotematters.co.uk . A proxy vote application form can be downloaded from this site or obtained from the electoral services team.

A list of the candidates for the two constituencies along with other information can be viewed here: bit.ly/389NmXt.

To vote at the UK General Election you must be registered to vote and: