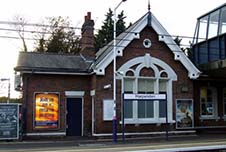 More trains should stop at Harpenden Railway Station at peak times to “ensure a fairer distribution of services,” the operator has been told.

Group leaders on St Albans City and District Council have written a joint letter to Govia Thameslink Railway (GTR) to demand the change.

Their intervention is intended to contribute to a major public consultation that GTR is running on the issue.

GTR say under a new timetable introduced last year, the only way to allow more stops at Harpenden is to reduce them elsewhere.

They say a reduction to trains stopping at Luton Rail Station is the best option and are now consulting residents, commuters and other interested groups on the proposal.

In their letter, the group leaders from all parties represented on the Council say:

Ideally, we want to see improvements in the rail service for both Harpenden and Luton rail users.

However, when peak-time station usage figures are considered, there is no doubt that Harpenden station is under-served compared to Luton.

Data from last year shows that Luton is served by 21 trains arriving at St Pancras between 7.02am and 9.49am during week days while Harpenden has 15.

However, Harpenden was found to have 7,464 passengers a day during this peak period while Luton had substantially less at 7,065.

Harpenden had 399 more passengers but was served by six fewer trains.

To ensure a fairer distribution of services along the line, we believe that the data makes a compelling and evidence-based case for increasing the number of services calling at Harpenden at peak times.

Group leaders are urging the District’s residents to take part in the online survey which is available here. It will close at 2pm on Tuesday 10 September.

The full text of the is available on the Council’s Facebook page, @StAlbansCouncil.