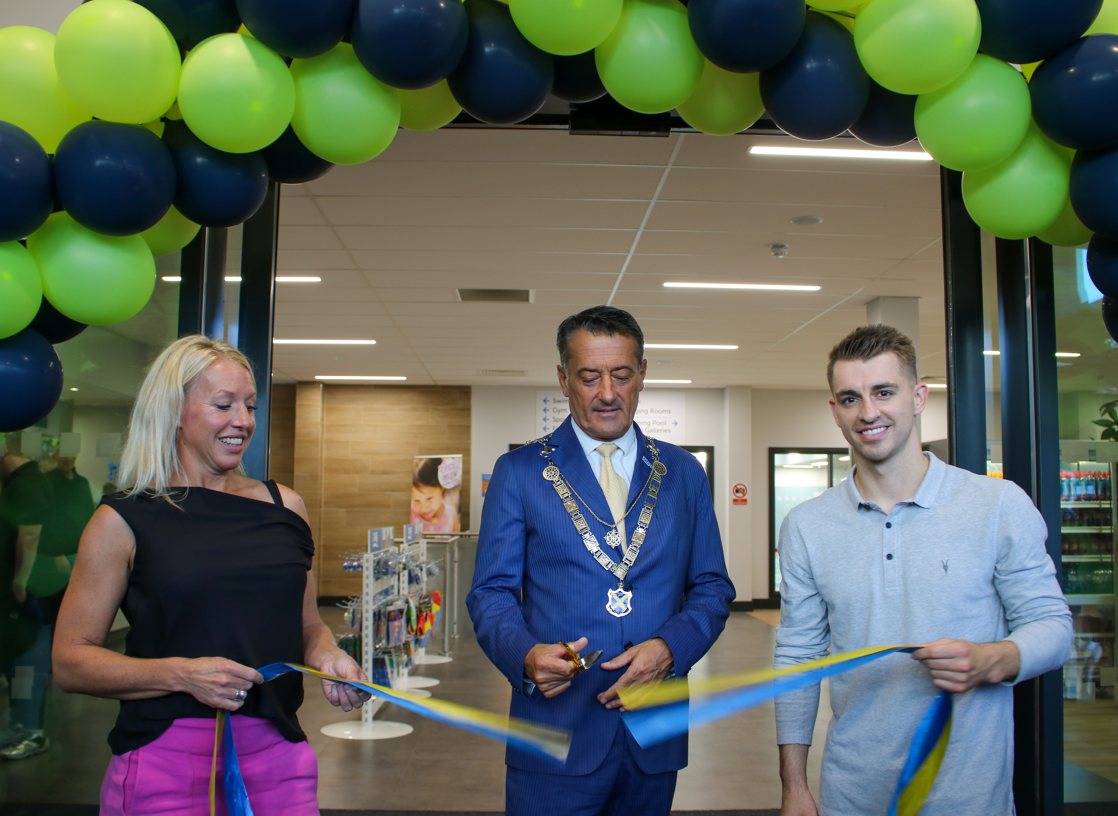 Max, who won his third Olympic gold at the pommel horse in Tokyo this summer, was born and brought up a few miles from the centre.

He assisted the Mayor of St Albans City and District, Councillor Edgar Hill with the official ribbon-cutting.

Joining them was badminton star Gail Emms MBE who won silver at the 2004 Olympic Games.

Customers of Harpenden Leisure Centre, sports clubs, school and community groups were also present at the launch at the centre in Rothamsted Park on Friday 24 September.

They enjoyed a number of family-friendly games and activities including tennis sessions.

The centre was rebuilt by owners St Albans City and District Council as part of a £20 million project which includes the creation of a new culture centre named after comedy legend Eric Morecambe.

Managed by contractor 1Life, the leisure centre opened for business in April and has built up a growing membership of almost 4,000 and more than 1,500 local children on the Swim School swimming lesson programme.

Councillor Anthony Rowlands, Chair of the Council’s Public Realm Committee who was at the launch, said:

I am thrilled that Max agreed to come along and open the new leisure centre that we are proud to have delivered.

He is one of our greatest ever Olympians, with six medals to his name, and his presence was inspirational to leisure centre users of all ages and abilities.

The new centre is a great asset for the town and sI I urrounding villages as it boasts not only a 25-metre swimming pool but also a learner pool, three exercise studios, sports hall and an 80-station gym.

A number of other civic figures were at the official opening, including the Mayor of Harpenden, Councillor Paul Cousin, have been invited.

Following the further relaxation of restrictions in recent months, we were delighted to welcome our valued members of the public to celebrate the opening of Harpenden Leisure Centre.

The exciting new facility offers the local community 40 group exercise classes per week along with other activities. More details are available on the centre’s website: https://www.1life.co.uk/Harpenden-Leisure-centre/.

The Eric Morecambe Centre (EMC), which is also managed by 1Life - is due to be officially opened on Saturday 16 October. More details about that event will be revealed at a later date.

Pictures: top, left to right, Gail, the Mayor and Max; bottom, Max with an Olympic Gold checks out the centre’s gym.

About 1Life
1Life is a forward thinking lifestyle and management solutions company that engages with people in local communities to enhance lives through health and wellbeing, physical activity, learning and the arts.

Employing over 1500 qualified staff, we inspire and encourage everyone to get the most out of their 1Life.

Our approach is collaborative, thoughtful and focused on creating tailored solutions to help our Local Authority clients achieve local outcomes and deliver results at a local level.