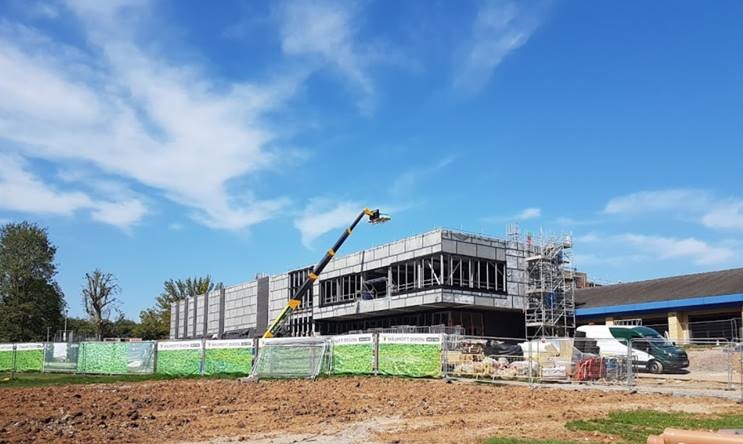 Spoil from the development of Harpenden leisure centre is free of asbestos and other contaminants, Councillors have been assured.

There had been concerns that the waste produced by excavation work at the site in Rothamsted Park might be hazardous.

However, examination by a health and safety inspector found that there was no dangerous material present.

Asbestos had been found during demolition work on the swimming pool building, but it had all been removed safely.

It is hoped to use the spoil in the park to contour an events area and improve flood defences instead of transporting it by lorries to a landfill site.

A planning application to allow this is due to be decided by a Council Committee on Monday 11 May.

This initiative is environmentally friendly as it will reduce the number of lorry journeys by around 1,500.

Councillors on the Audit Committee of St Albans City and District Council raised the contamination risk with the development team.

Some information about the spoil on the Council’s website had wrongly implied that there might be contaminants.

This had understandably caused considerable concern, but we have now had a cast iron assurance there is nothing to fear.

The spoil has been rigorously tested and we have been told there is no asbestos or other material that might pose a risk. That is good news and will be welcomed by all of Harpenden’s residents.

The Council is creating new leisure and cultural centres in the park as part of an £18.8 million redevelopment.

During the Covid-19 lockdown, it has been possible to continue with the construction work while respecting social distancing guidance.

Visitors to site receive a brief medical assessment and temperature check before they are granted access.

The existing swimming pool building is being turned into a leisure centre. It will include an improved gym, new café, sports hall, sauna, steam room, learner pool and refurbished main pool.

The nearby Sports Centre is being converted into a Cultural Centre, replacing ageing Harpenden Public Halls in Southdown Road. It will include a 511-seat theatre, two function rooms, an exhibition space, bars on two floors and a café overlooking the park.

The Leisure Centre is due to open later this year and the Cultural Centre is set to open in mid-2021.

Despite the challenges Covid-19 has brought, the developments are still progressing very well.

Our building contractor Willmot Dixon Construction have stringent measures in place to ensure the safety and welfare of their workforce.

They have received positive reports from the Health and Safety Executive after their visits to observe working conditions.

This has been a very difficult time but we remain on course to finish the new leisure centre before the end of this year and the new cultural centre by the middle of next year.

Given the current coronavirus restrictions, the continued progress of these  projects is a remarkable success. I sincerely thank contractors Wilmott Dixon and their workforce for their endeavours in seeking to achieve the earliest completion dates for both the Leisure and Cultural Centres.