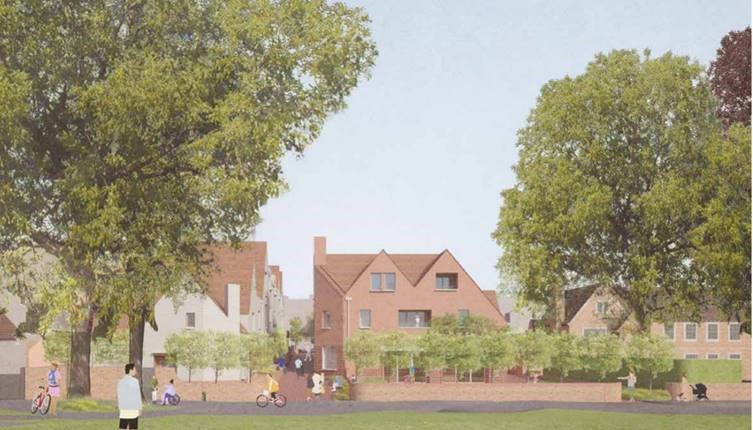 A planning application to create new homes and business space on the site of  Harpenden Public Halls is to be submitted.

The move follows the opening of a new cultural hub, The Eric Morecambe Centre (EMC), with a 511-seat theatre to serve the town.

St Albans City and District Council, which owns the site, is carrying out the redevelopment.

Money raised from the project will help pay for its completed £20 million project to build the EMC and an adjacent leisure centre at Rothamsted Park.

The plan is to demolish the existing buildings and construct four new blocks. They will have a total of 10 homes for social rent, 19 flats for sale at market rent and 322 square metres of commercial space.

There will also be 29 car parking spaces, a landscaped footpath from the Common to Arden Grove and two green spaces including a courtyard.

The final drawings evolved from a design charette which allowed the local community to help shape the plans.

An update on progress was given to a meeting of the Council’s Regeneration and Business Committee on Tuesday 23 November.

Councillors were told that Harpenden Town Council was consulted about the proposals and their feedback considered when completing the final design.

The Committee agreed to a planning application being submitted and for measures to be taken to appoint a building contractor.

A later meeting of the Committee will review the budget which has been affected by the rising cost of construction materials.

I’m pleased that we are moving swiftly forward with this prestige development in the very heart of Harpenden.

We consulted intensively with the community throughout the design work and took on board the feedback to plan for much-needed new housing and business space of the highest quality.

We have taken great care to produce a sympathetic design to fit in with the surrounding buildings and the green environment of the Common. We have also opened up the centre of the development to create a new public walkway from the Common to Arden Grove.

We’ll continue to have a dialogue with the Town Council about the proposals as we want to ensure that we are meeting the needs of the local community and their neighbourhood plan.

Since embarking on this venture, there has been a steep rise in building costs which will inevitably require some changes to the original budget. I am confident, though, that we will be able to manage those.

This year we have opened fantastic new leisure and culture centres in Harpenden and now we are progressing with this significant development. It shows that we are committed as a Council to making major improvements to the town.

Graphic: how the new development may look from the Common side.