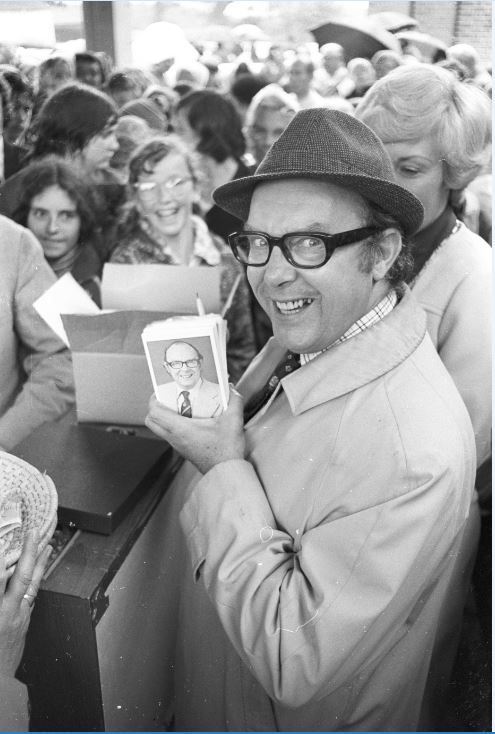 Harpenden’s new culture centre to be named after comedy legend

Harpenden’s new culture centre is to be named after one of its most famous residents – comedy legend Eric Morecambe.

The centre is being built on the site of the town’s former sports centre in Rothamsted Park and is due to open by the late spring of next year.

Eric, who died in 1983, lived in the West Common area of Harpenden during the height of his fame as part of TV’s Morecambe and Wise double act.

The Eric Morecambe Centre (EMC) will include a 511-seat theatre with state-of-the-art production equipment to allow major touring shows to be staged as well as those put on by local groups.

There will also be an exhibition space, two function rooms, a local history room, bars on two floors and a coffee shop with views across the park.

The EMC is being built along with a new Harpenden Leisure Centre by St Albans City and District Council in an ambitious £20 million project.

The Council approached Eric’s family and asked permission to name the centre after him and I am delighted that they have agreed.

Eric Morecambe was one of Britain’s most-loved and treasured comedians as well as one of Harpenden’s most famous residents.

Given the huge contribution he made to the country’s entertainment industry, it is only fitting that the town’s culture centre should be named after him.

It will be a fantastic asset for Harpenden and will be a focus for the promotion and enjoyment of the arts. I’m sure Eric would have approved.

Despite the considerable construction difficulties caused by the coronarivus restrictions, it will open on schedule on Monday 4 January with the pools opening the following Monday.

I am delighted that Eric Morecambe’s legacy will live on locally in the new culture centre name after the Harpenden Public Halls close for redevelopment next year.

This centre will provide a wonderful complementary cultural and entertainment facility alongside the sparkling new pools, sports hall and gym which Harpenden residents will rightly be proud to have on their doorstep.