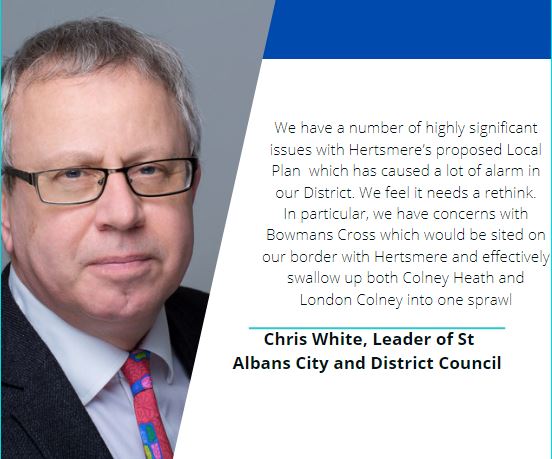 Plans to create a garden village to the south-east of St Albans District would be in breach of the Government’s Green Belt policy, Councillors have warned.

The development, which could eventually have 6,000 homes, would “coalesce” with both Colney Heath and London Colney.

It would also have “poor access” to jobs, essential facilities and transport unless huge sums were invested in new infrastructure.

The observations on the proposed village, called Bowmans Cross, have been made by St Albans City and District Council (SADC).

This is a document that identifies land for future housing, commercial and infrastructure development over the next 15 years.

Members of SADC’s Local Plan Advisory Group, at its meeting on Tuesday 30 November, agreed to send a letter to HBC outlining its response to their draft LP.

This includes the creation of the garden village close to Junction 22 of the M25, a few hundred metres from both London Colney and Colney Heath.

Councillor Chris White, Council Leader and the Group’s Chair, said after the meeting:

Our letter raises a number of highly significant issues with Hertsmere’s proposed LP which has caused a lot of alarm in our District. We feel it needs a rethink.

In particular, we have concerns with Bowmans Cross which would be sited on our border with Hertsmere and effectively swallow up both Colney Heath and London Colney into one sprawl.

The Green Belt is there to provide space between communities, keeping them separate so they retain their own individual identities. Hertsmere’s LP appears to be in breach of that.

We will be interested to see their response to these concerns and our observation that there are alternative development sites within Hertsmere that would seem more appropriate.

The detailed response to HBC’s LP is contained in a letter from SADC’s Spatial Planning Manager, Chris Briggs.

It has “raised significant concerns” about Bowmans Cross, however, since it was first put forward as a potential development site in 2017.

“SADC has seen no evidence to date that the fundamental problems that the location of Bowmans Cross provides for this scale of potential development can be successfully overcome,” the letter states.

In contrast to options for developing existing settlements, there would be “poor access” to a wide range “of employment opportunities, facilities and poor rail access”.

The investment required  to deliver similarly sustainable transport infrastructure at Bowmans Cross would need to be “truly transformational”.

This is reflected, the letter says, in Bowmans Cross’s very low scores in accessibility and transport assessments.

“There has to date been no acknowledgement in the evidence of the significant existing traffic issues in the area, which need to be fully recognised and addressed,” the letter says.

“The observation has been made that, unless there are transformational improvements, traffic is likely to grind to a halt at peak periods.”

Bowmans Cross would also involve the “considerable narrowing of the Green Belt” that keeps local communities separate and distinct.

Cllr White said after the meeting:

Hertsmere is at an early stage in preparing its Local Plan which we know from our own experiences is a complex and challenging undertaking.

One essential requirement is that the LP must evolve from the feedback that is received from consultations with the communities that will be affected.

In that regard, I trust any concerns raised by ourselves, parish councils and residents will not be ignored, but taken into account and acted upon.

We look forward to continuing to collaborate with Hertsmere on their LP, particularly as the proposed Bowmans Cross village is on the outer edge of their area, closer to existing settlements in our District rather than in theirs.

To see the letter in full, go to here.