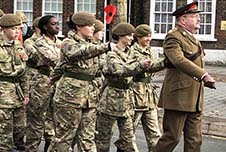 The service was preceded by a parade featuring representatives from Air, Sea and Army Cadets, the Guiding and Scout movements and the Police, Ambulance and Fire services.

After they arrived at the Memorial, a service led by Reverend Canon Mark Dearnley began and was followed by a two-minute silence at 11am.

Among those who attended were Honorary Aldermen, District, County, Town and Parish Councillors and leaders of the main faiths.

The Mayor dressed in her official robes and accompanied by her Macebearer laid a wreath along with the Lord-Lieutenant of Hertfordshire, Robert Voss CBE.

On Monday 11 November, Remembrance Day, she returned to the War Memorial to mark the two minutes’ silence at 11am.

I was very proud to lead our community as it paid its respects to those who gave their lives in two World Wars and other conflicts while serving their country.

I was particularly struck by the number of people of all ages and backgrounds who took part in the Remembrance Sunday parade and multi-faith service.

It was a huge turn-out showing that our whole community had got together to support the brave men and women of our Armed Forces. 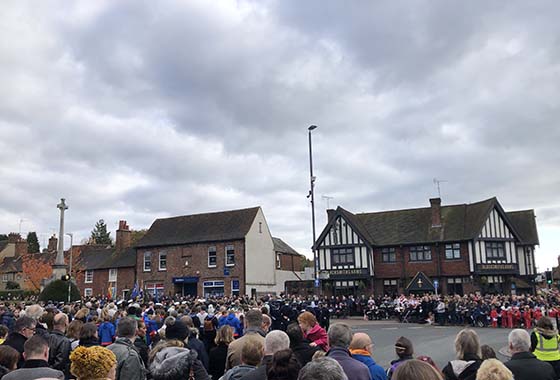 Pictures: Scenes from the Remembrance Sunday service and parade by Louise Hosking.