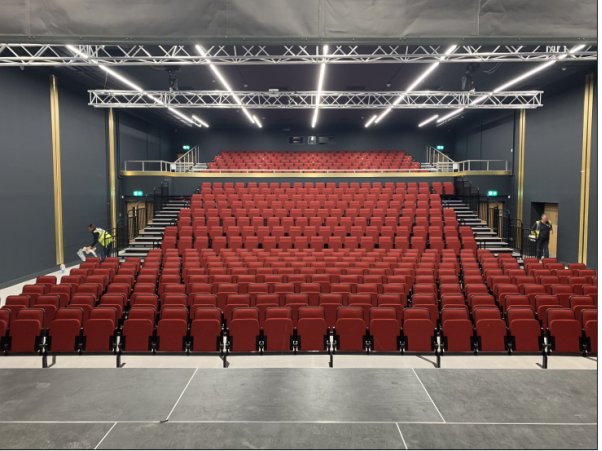 A new culture centre named after Eric Morecambe is to have its official opening next month with residents invited to a day of shows, workshops and other attractions.

The Eric Morecambe Centre (EMC) in Harpenden – which includes a 511-seat theatre – is to be launched on Saturday 16 October.

Residents from across St Albans District are invited to join in a day of celebration featuring tours of the centre, workshops and other activities from 10am to 4pm.

The EMC - constructed on the site of the former sports centre in Rothamsted Park - will be officially opened by the Mayor of the City and District of St Albans, Councillor Edgar Hill.

He will be joined by members of the Morecambe family as well as the Harpenden Mayor, Councillor Paul Cousin.

The EMC was built by owners St Albans City and District Council to replace ageing Harpenden Public Halls as part of a £20 million project.

This included the building of a new sports centre which is due to be opened by Olympic gymnast Max Whitlock and badminton star Gail Emms on Friday 24 September.

Both centres are managed on the Council’s behalf by leisure contractor 1Life which is organising the launch day.

The public halls will be redeveloped by the Council with plans due to be submitted shortly for approval as mixed residential and commercial space.

Eric was a Harpenden resident at the height of his international fame as a comedy double act alongside Ernie Wise.

The EMC’s theatre boasts state-of-the-art production equipment to allow major touring shows to be staged as well as those put on by local groups.

There is also an exhibition space with two functions rooms, a history room, bars on two floors and a coffee shop with views across the popular local park.

I am sure residents of Harpenden and the surrounding area will be hugely impressed with the new culture centre.

I would urge them to come along for the official opening, have a look around and take part in some of the activities that have been lined up. It will be a memorable, action-packed day for everyone of all ages and interests.

I am absolutely certain the EMC is going to be welcomed and extensively used by local residents across the District and beyond as a first-class cultural replacement for the Harpenden Public Halls within a very short period of opening.

The EMC will quickly become part of Harpenden’s heritage providing the community with a quality space to promote and enjoy theatre and the wider arts within the attractive environment of Rothamsted Park.

It will be a place for creativity and expression which I believe Eric would have really enjoyed. It will also provide a permanent home, archive centre and exhibition space for the Harpenden History Society.

Along with the new leisure centre, it is proof of our commitment to provide our residents with recreational facilities of the highest quality and modern professional standards.

Eric was one of our country’s most loved and adored comedians, as well as one of Harpenden’s best-known residents. We are grateful to his family for allowing us to name the new centre after him and celebrate his life in this way for future generations to enjoy.

It’s fantastic to have this brilliant new facility to replace the much-loved public halls and enhance the uptake and provision of arts for the wider community.

“Combined with the regeneration of the old sports centre, there’s a wealth of opportunities available for people to get involved in, and we look forward to welcoming people to come and see the new facilities.

About 1Life
1Life is a forward-thinking lifestyle and management solutions company that engages with people in local communities to enhance lives through health and wellbeing, physical activity, learning and the arts.

Employing over 1500 qualified staff, we inspire and encourage everyone to get the most out of their 1Life.

Our approach is collaborative, thoughtful, and focused on creating tailored solutions to help our Local Authority clients achieve local outcomes and deliver results at a local level.