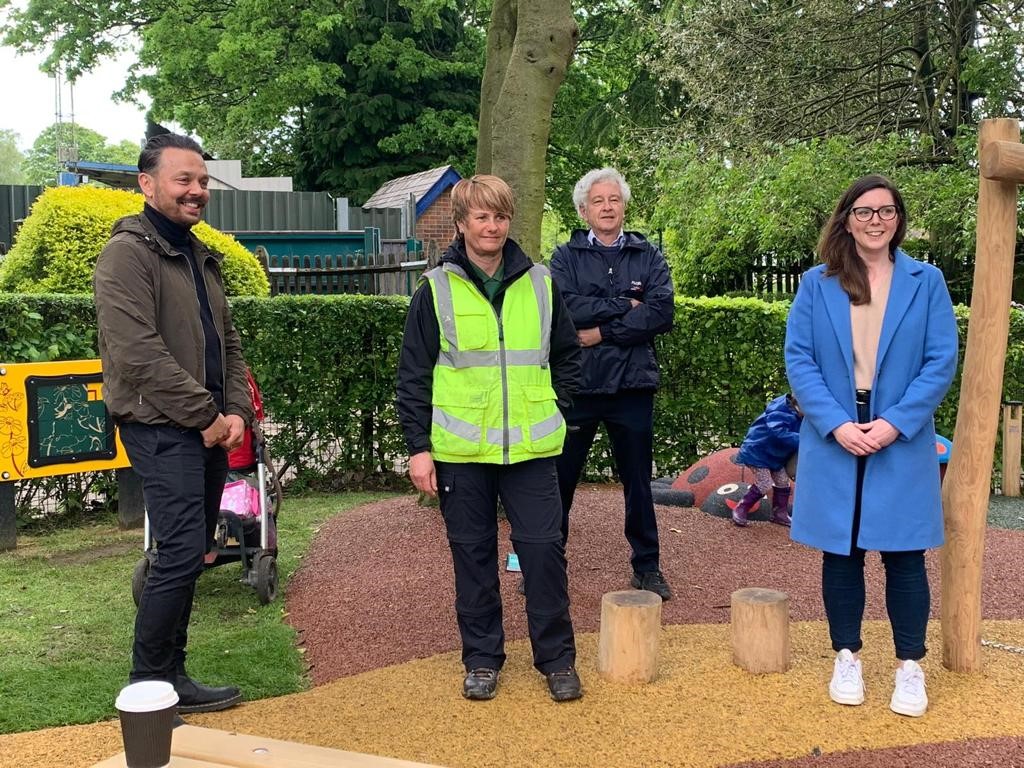 A new £220,000 children’s playground at Clarence Park in St Albans has been officially opened with hundreds of people attending in the first week.

St Albans City and District Council, which manages the park, delivered the project with the local community group Clarence Play.

Clarence Play helped organise efforts to raise funds and were consulted about the concept designs.

The playground was officially opened by Councillor Anthony Rowlands on Saturday 22 May along with members of Clarence Play and a representative of the design firm Kompan.

I am thrilled that the construction of the new play area has been completed and it has now opened on schedule.

Thanks are due to Clarence Play for their magnificent work in raising money and collaborating with the designs.

The previous playground was installed around 25 years ago and had reached the end of its life. It was high time that this fantastic park had a new playground and I am proud that we have created one.

It is brimming with a wide range of first-rate attractions that I am sure will be enjoyed by young children and their parents for many years to come.

The play area was designed by specialist firm Kompan which was also the contractor for the Verulamium Park play area which opened late last year.

The Council’s City Neighbourhoods Committee, which manages community assets in the unparished area of St Albans, provided £137,500 from its budget.

Clarence Play obtained a grant of £67,500 from waste contractor Veolia and the rest of the finance came from S106 payments, money contributed by property firms for communityinfrastructure.

All of us on the Clarence Play team are incredibly proud of what's been achieved. Since its first kick-off meeting in 2018, our group of local volunteers have brainstormed fundraising ideas, run social media campaigns and put together detailed funding applications as well as planning and executing a thorough consultation with the community of St Albans.

We wanted to build a playground that, at its heart, was designed by the children who use it. So, it was important that local people were involved in the decisions about what should be prioritised for the new playground.

What came back was equipment for older children, inclusive play opportunities and, of course, demands to keep the sandpit! When reviewing the submissions from various playground designers, it was clear Kompan had really understood the focus on natural materials, with nods to local landmarks along with the broad range of various equipment to suit children's needs.

We wouldn't be where we are today without the grant and budget allocation from the City Neighbourhoods Committee and the Veolia Environmental Trust. It meant we could deliver an outstanding playground. The guidance and help we got from the Council’s Green Spaces Team was absolutely invaluable.

Pictures: the official opening of the playground with, from the left, Jerry Jarman, area sales manager of Kompan, Angela Solomon, Clarence Park ranger, Cllr Rowlands and Louise Mann; children enjoy one of the attractions.