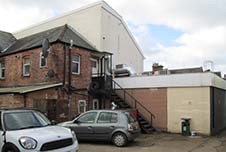 A property extension is in breach of planning permission and will need to be rebuilt, a Planning Inspector has ruled.

Simon Hand upheld a decision by St Albans City and District Council to serve an enforcement notice that ordered the reconstruction.

He said the unapproved design was “poorly thought out” and clearly harmed “the character and appearance” of the surrounding area.

Extraction equipment attached to a wall must be removed as well because it also does not have planning permission.

Mr Hand allowed the property owner, Mr Maroof Khan, a year to carry out the work to the building at 149 Hatfield Road, in Fleetville, St Albans.

He refused Mr Khan’s application for the Council to pay the costs he had incurred in making the appeal.

In July 2013, the Council gave planning permission for work to create four one-bedroom flats on the first floor of the property.

However, this was not done according to the plans with the main difference being a larger, more prominent roof and wall. An extraction system for a ground floor restaurant was also put up without planning permission.

The Council issued an enforcement notice in April last year ordering the extension to be rebuilt according to the permissions and the external extractor to be removed. Mr Khan appealed against the notice on various grounds.

Mr Hand said in his written judgement that the main issue was “whether the roof as built harms the character and appearance of the area”.

He said the roof and a new wall facing Sandfield Road had become “a dominant feature in the streetscape”. The new designs were “crude, oddly-shaped” and larger than the original plans which would have had less impact.

Mr Hand also ruled the unapproved extraction equipment for a ground- floor restaurant should be taken down. He noted it was leaving soot smears on a wall and may be environmentally harmful.

He said the approved design for the extension was flawed in that it produced flats with very low ceilings.

In giving the owner 12 months to comply with the enforcement notice, he was allowing time for the Council and the property owner to agree compromise proposals.

We’re pleased that the Inspector has upheld our enforcement notice and dismissed this appeal.

We’re also delighted that he has dismissed an application for us to pay the property owner’s costs.

The unapproved designs upset many residents in the neighbourhood and there were also complaints about noise and smells from the rogue extraction equipment.

These views were strongly supported by the Inspector who described the building work as crude and damaging to the area’s appearance. He also voiced concerns about the extractor.

This case demonstrates our commitment to ensuring the planning permissions that we grant are complied with. It shows we will take robust action against those in breach of them.

We will follow up on the Inspector’s suggestion to have talks with the owner to see if any changes to the original design can be agreed.

Picture: the extension to 149 Hatfield Road