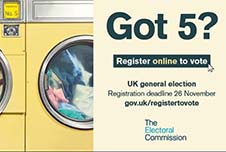 General Election poll cards have been sent to voters in two Parliamentary constituencies – St Albans; and Hitchin and Harpenden.

St Albans City and District Council is administering the election on Thursday 12 December in both constituencies.

It is still possible to register to vote with the deadline for doing so being midnight on Tuesday 26 November.

It only takes a few minutes to register online by going to  www.gov.uk/register-to-vote. This is highlighted by the Electoral Commission’s Got 5? campaign.

For those residents who do not wish to register online, a paper copy of the registration form is available.

It can be obtained from the local elections team by emailing elections@stalbans.gov.uk or by phoning 01727 819294.

If you are already registered, you do not need to do so again and should receive your poll card shortly.

The deadline for candidate nominations is 4pm on Thursday 14 November with the verified lists being published by 5pm on the same day.

Application forms can be downloaded from www.electoralcommission.org.uk/i-am-a/voter/how-cast-your-vote. You can also request forms from the elections team using the contact details above.

Proxy voting means another person can vote on your behalf, although you will have to state a reason why you cannot attend a polling station.

Postal votes will be sent out between Friday 22 November and Tuesday 3 December.

There have been changes to four of the usual polling stations in St Albans.

St Peter’s School is replaced for the election by the Methodist Church Hall, Marlborough Road.

Poll cards sent to voters affected by the changes contain details of the new venues.

“Anyone not yet registered to vote should do so as soon as possible. They will then be able to have their say at the General Election next month.

“I urge people living in the St Albans District to also remind their family and friends about the need register by the deadline. It only takes two or three minutes to complete the form and register to vote online.

“I would also ask people in St Albans to check their polling cards to see what polling station they should go to as there have been a few changes.”

To be eligible to vote in the General Election, a person must be registered to vote; aged 18 or over; a British citizen, a qualifying Commonwealth citizen or a citizen of the Republic of Ireland; and not subject of any legal incapacity to vote.

Additionally, the following cannot vote: members of the House of Lords; EU citizens resident in the UK; convicted persons detained in pursuance of their sentences; and anyone found guilty within the previous five years of corrupt or illegal practices in connection with an election.