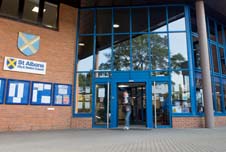 Alternative routes for aircraft using London Luton Airport must be considered to reduce excessive noise over the St Albans District.

St Albans City and District Council has made the demand in its response to a Civil Aviation Authority (CAA) consultation on a related issue.

The CAA is conducting a review of a new route – known as the RNAV – which was introduced in August 2015 for aircraft flying out of the airport.

In its submission, the Council says the subsequent noise impact on the District has been “substantial” and “unexpected”.

Councillor Salih Gaygusuz, Portfolio Holder for Business and the Community, wrote on behalf of the Council:

For the most affected communities many more aircraft come closer to them, or fly directly overhead.

Thus the concentration of previously widespread flights closer to some communities greatly increases cumulative noise impact for them. Some direct overflight of urban areas is reduced, but the concentration effects are serious.

Cllr Gaygusuz says residents are “very concerned” about RNAV with the Council having seen “a dramatic increase in complaints”.

This demonstrates that the level of noise nuisance has increased since the introduction of RNAV, in particular within the Batchwood, Harpenden South, Marshalswick North, Marshalswick South, Sandridge and Wheathampstead Wards; areas that are at the edges of the RNAV route.

The growth in air traffic is higher than anticipated in the original RNAV consultation. Although it is acknowledged that the increase in air traffic may have contributed to noise impacts, the airspace changes are likely to have exacerbated the issue.

Cllr Gaygusuz also raises the issue of air quality and has asked the CAA to reveal what research “is being carried out on the environmental damage caused by air pollution from aircraft”.

My Council urges the CAA to strongly consider and consult on alternatives to the current RNAV route, including the potential option of reverting back to previous routes and more dispersed flight paths.

This consideration should comprehensively set out the advantages and disadvantages of each alternative so as to properly inform the District’s residents.

My Council trusts that the CAA will act carefully and speedily in its role as independent regulator to robustly assess whether or not this airspace change has proved desirable and acceptable.

The Council has also responded on a separate consultation by London Luton Airport on its draft Noise Action Plan (NAP) for 2019 to 2023.

Cllr Gaygusuz, again writing on behalf of the Council, “welcomes actions to encourage airlines to use quieter aircraft”.

It would be helpful to see commitments on the part of the Airport to achieve specific targets on this and to penalise airlines that do not contribute.

A special programme of noise restrictions during the peak summer period should be included in the plan, he says. These would include a ban on aircraft that generate noise above a certain level.

Cllr Gaygusuz welcomes proposals to identify new opportunities to reduce noise. These include increasing the rate aircraft climb after departure and developing an additional route.

He also calls for regular surveys of local communities about the noise issue and more public surgeries, particularly in areas affected by the RNAV route.

“Community engagement events, including public surgeries and workshops, should also be held at times outside the working day to allow all those affected to attend,” he says.

Finally, my Council would request that the NAP is a more precise document with more measurable targets.

In another development, Luton Borough Council - the airport's owners -  is currently undertaking a public consultation on its expansion options. (See Note below)

The Council will be submitting its views on this at a later date.

Residents who want to find out more are encouraged to attend one of the drop-in events that the airport is staging to explain their plans.

You can find out more information and respond to the consultation online at https://futureluton.llal.org.uk/

All feedback must be received by LLAL before 5pm on Friday 31 August 2018 to ensure comments are considered.

London Luton Airport has been the UK’s fastest growing major airport over the last five years, handling just under 16 million passengers a year in 2017.

The consultation focuses on how to expand the airport and make best use of its existing runway up to the year 2050.

The plan is to expand the airport to achieve that growth by increasing the capacity of the terminal and other infrastructure.

The type and scale of development means that it is classed as a Nationally Significant Infrastructure Project. As such, the airport must apply to the government to authorise the proposed development. The application will be examined by the national Planning Inspectorate, and decided by the Secretary of State for Transport.