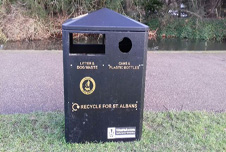 New recycling bins have been installed at Verulamium Park as the first step in a long-term plan to roll out similar bins across council-run parks.

The new bins have a compartment for the recycling of plastics and tins, alongside another for general refuse.

The new recycling bins are located between the River Ver and the lake. Their use will be monitored over the next three months to check whether waste is being separated correctly.

Verulamium Park is the first council-owned park to have recycling bins. If the recycling bins prove popular, then the Council will look at installing similar bins at its two other parks: Rothamsted Park; and Clarence Park.

Councillor Daniel Chichester-Miles, Environmental Portfolio Holder for St Albans City and District Council, said: “These new recycling bins mean that park users will be able to recycle their plastic bottles and food trays, as well as cans. The aim is to eventually replace all the waste bins in Verulamium Park with these new recycling bins.”

Verulamium Park is set in 100 acres of beautiful parkland close to St Albans City centre and is a popular attraction throughout the year with wide range of facilities.

The park is named after the Roman City of Verulamium on which it stands. The old Roman City walls and outline of the London Gate can still be seen.

Near-by Verulamium Museum displays hundreds of remarkable objects that have been excavated from the park.

More information about Verulamium Park is available on the Council's website.