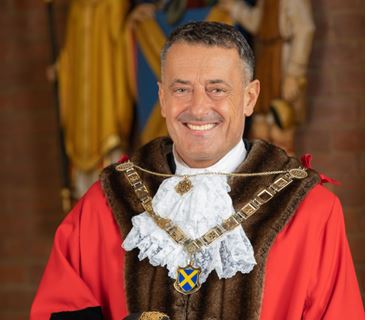 The Mayor of St Albans City and District will lead a Remembrance Day Parade and Service on Sunday 14 November.

Councillor Edgar Hill will be joined by leaders of the major faiths at the event to honour the nation’s war dead.

Everyone is welcome to come and pay their respects to the members of Britain’s  armed forces who lost their lives in two World Wars and other conflicts.

Last year’s annual event was cancelled because of the COVID-19 pandemic with an online service being held instead.

Royal British Legion members will gather with the Mayor for the start of the parade near Marks & Spencer’s store in the City Centre at 10.30am.

Representatives of air, sea and army cadets, the Guiding and Scout movements, the Police and other uniformed services will be present.

Honorary Aldermen and Councillors from County, District, Town and Parish Councils will also be in attendance.

The Mayor will be accompanied by his Macebearer and both will wear their official robes.

The procession will make its way to the War Memorial near St Peter’s Church for the start of the service at 10.50am.

The faith groups will be represented by Revd Mark Dearnley St Peter’s Church who will conduct the service.

During the service, there will be prayers and the St Albans City Band will provide the music for hymns.

Wreaths will be laid by the Mayor, The Vice Lord-Lieutenant, Richard Beazley and representatives of the Police, the Fire and Rescue and Ambulance Services.

Last year we had no option but to cancel the parade and service to protect our community from the COVID pandemic.

I am pleased that this year’s event is able to go ahead and I am sure that many people will want to join us from all parts of our community.

This is our way of recognising the tremendous debt we owe to the men and women who sacrificed their lives in the defence of their country. We must always remember them.

I would also ask people to give generously to this year’s Poppy Appeal to help the Royal British Legion carry out the fantastic welfare work it does for our Armed Forces families.