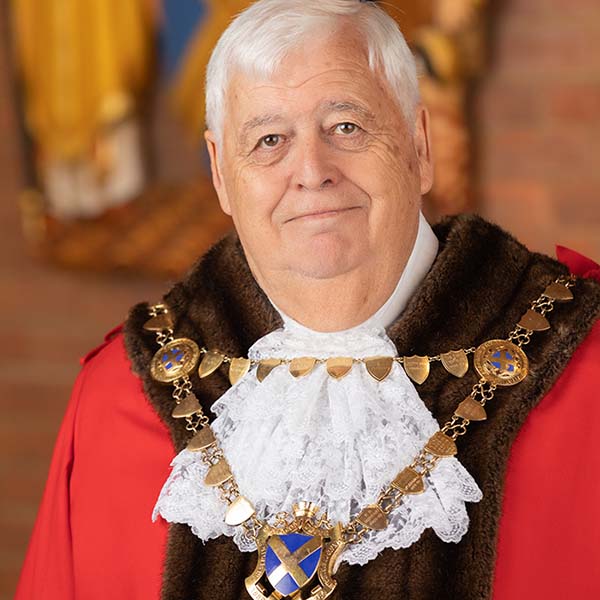 The Mayor of St Albans City and District will lead a Remembrance Day Parade and Service on Sunday 13 November.

Councillor Geoff Harrison will be joined by leaders of major faiths at the event to honour the nation’s war dead.

Everyone is welcome to come and pay their respects to the members of Britain’s  armed forces who lost their lives in two World Wars and other conflicts.

The Mayor will lead a parade through the City Centre at 10.30am with representatives of the Royal British Legion, air, sea and army cadets, the Guiding and Scout movements, the Police and other uniformed services.

Honorary Aldermen and Councillors from County, District, Town and Parish Councils will also be in attendance.

The Mayor will be accompanied by his Macebearer and both will wear their official robes.

The procession will walk to the War Memorial near St Peter’s Church for the start of the service at 10.50am.

Faith groups will be represented by Revd Mark Dearnley of St Peter’s Church who will conduct the service. A bugler will play the last post which will be followed by a two-minute silence at 11am.

During the service, there will be prayers and the St Albans City Band will provide the music for hymns.

Wreaths will be laid by the Mayor as well as Richard Beazley, the Vice Lord-Lieutenant of Hertfordshire, Daisy Cooper, MP for St Albans, and representatives of the Fire and Rescue, Police and Ambulance Services and other groups.

After the National Anthem is sung, the Vice Lord-Lieutenant, Mayor and Councillors will return in procession to a saluting stand where the Mayor will take the salute of the parade.

I expect that many people from all parts of our community will want to join us to pay their respects to those who sacrificed their lives for others.

They will want to recognise the tremendous debt we owe to the men and women who defended our country and our freedoms. We must always remember them.

I would also ask people to give generously to this year’s Poppy Appeal to help the Royal British Legion carry out the fantastic welfare work it does for our Armed Forces families.

Some Town and Parish Councils within the District, including Harpenden Town Council, are also organising Remembrance Sunday services.