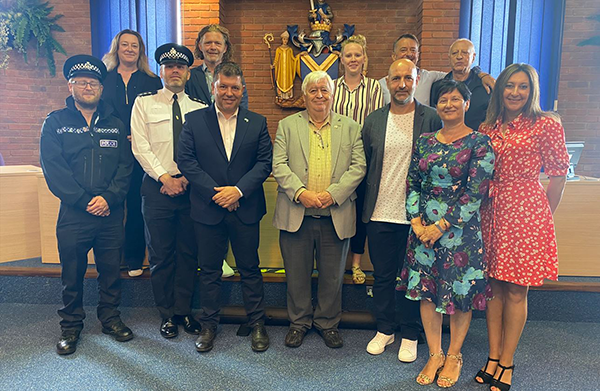 St Albans Mayor Geoff Harrison welcomed a delegation of visitors from an Italian town twinned with the City.

Cllr Harrison hosted the official visit of three officials from Fano, a beach resort on the Adriatic Coast, which has an important Roman heritage like St Albans.

He escorted them around the District with former Mayor Councillor Edgar Hill, who is fluent in Italian, acting as translator.

During their two days exploring the District, the visitors were given a tour of the Cathedral.

They were also shown around St Albans City and District Council’s major redevelopment of a City Centre site known as CCOS South.

This will deliver more than 90 much-needed new homes, including 33 social housing properties, as well as commercial space.

The three visitors were from a Fano friendship group, known as the Amici Senza Frontiere, and were the President, Massimiliano Barbadoro, the Treasurer, Raffaela Pecorelli, and the Councillor for Tourism, Etienn Lucarelli.

They also took a short trip to Harpenden to look round the town’s new Leisure Centre and the Eric Morecambe Centre, a cultural hub which includes a new state-of-the-art theatre.

These amenities were recently delivered by the Council as part of a £20 million project.

The delegation’s final visit was to one of the Council’s newest developments – the Cottonmill Community and Cycling Centre in St Albans.

This facility includes outdoor pump and cyclocross tracks as well as a main building with a function room, café and a cycle hub offering bike maintenance and repair workshops.

It was a delight to welcome visitors from Fano, an Italian town with which we have been twinned for many years.

Fano is a similar size to St Albans and was once the site of a major Roman settlement, so we have plenty in common.

We provided our Italian friends with a busy programme, taking them on tours of some of our District’s major attractions, both old and new. We also showed them what we as a Council have been doing to improve the District and make it an even more vibrant place to live and work.

I think they were impressed by some of our recent projects such as the Eric Morecambe Centre and CCOS South and I hope it gave them a few pointers for developing Fano.

These twin town visitis are an important way of building relationships with people from other countries and exchanging ideas for creating a better future for our communities.

Pictures: Top: The Mayor (centre, front row) with the Italian delegation along with representatives from Herts Police and the Council; middle: the Italian delegation at the Cathedral, from left to right, Massimiliano Barbadoro, Raffaela Pecorelli and Etienn Lucarelli; bottom: the Mayor shows the visitors around Harpenden’s Eric Morecambe Centre.