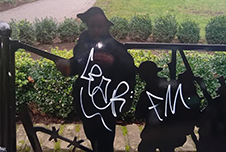 A World War One memorial bench in St Albans was defaced in “a despicable act of vandalism.”

White paint was sprayed on the haunting enamelled-steel design, depicting a group of “Tommies” advancing over barbed wire towards enemy lines.

Daubed onto the two largest figures, the graffiti appears to spell out the words Lear fM, possibly someone’s “tag” or street name.

The metal bench was bought by St Albans City and District Council last year as part of the commemorations to mark the centenary of the Great War’s end on 11 November 1918.

John O’Conner, the Council’s parks contractor, has now cleaned off the offending paint to restore the bench to its previous condition.

The company has waived its fee for the work out of respect to the men and women that the bench commemorates.

Hertfordshire Constabulary has been informed about the criminal damage and anyone with information is asked to contact them.

The bench was positioned in the run-up to Remembrance Sunday last year by the historic Verdun Tree in Waxhouse Gate, near the Cathedral, to provide a quiet place for reflection.

The Verdun Tree grew from a conker taken from the only tree left standing in the battlefield of Verdun, one of the bloodiest clashes of the First World War.

This was a truly despicable act of vandalism that I am both upset and outraged by.

The design of the bench is very striking, making it quite clear that it is a tribute to those who gave their lives for their country.

I am furious – and I am sure the whole community will be as well – that someone could deface it in this way.

If anyone can shed any light on who is responsible, then I would urge them to contact the police immediately. I would also like to thank our contractor for cleaning it off so quickly.

We are doing everything we can to trace those responsible for this crime, which has understandably caused great upset and offence within the local community.

As part of our enquiries we are appealing to anyone who may have witnessed the incident, which happened over the weekend of January 19 and 20, or anyone who has any information that may assist our investigation.

The bench also includes on one side a depiction of red poppies that was left untouched by the vandal.