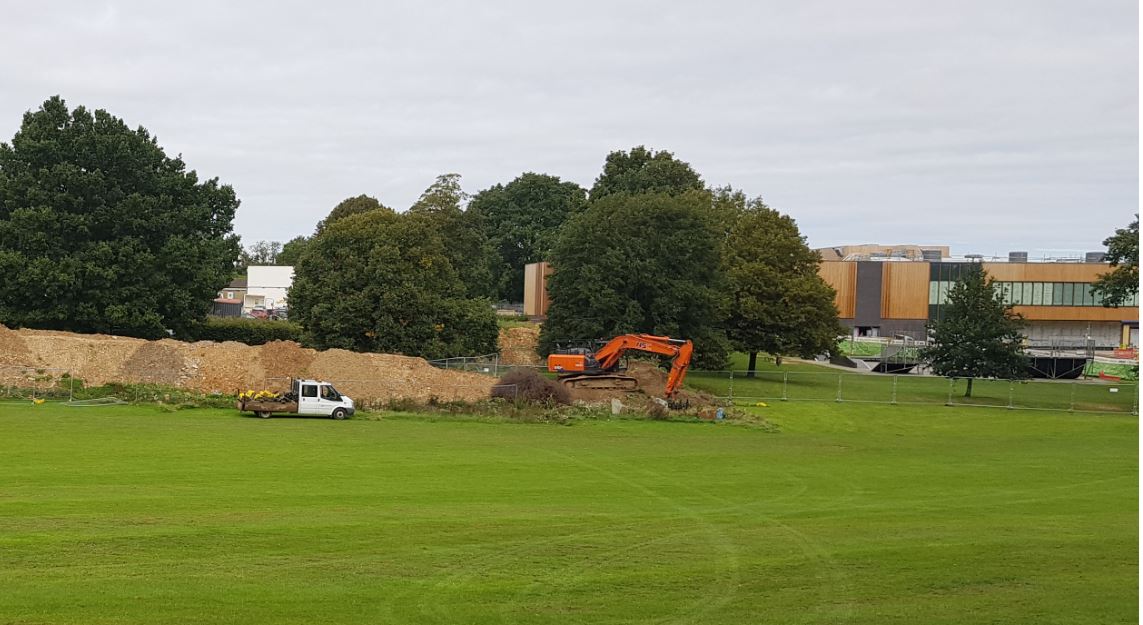 Work to level an events area in Harpenden’s Rothamsted Park with spoil from the nearby leisure centre development has begun.

Around 10,000 cubic metres of subsoil has been excavated during the construction of the new centre.

It was originally planned to remove the material from the park by a fleet of trucks and take it to a landfill site.

However, a more eco-friendly initiative to retain the soil, using it to contour a football pitch and surrounding area, is now underway.

This will not only make good use of the soil but also avoid the need for around 1,400 lorry journeys back and forth to the landfill site.

The pitch has now been fenced off and work will begin next week to transfer the soil and start the levelling works.

The area will then be seeded with the project likely to take up to nine weeks. It will remain fenced off until the grass is established.

Contractor Willmot Dixon is carrying out the work on behalf of St Albans City and District Council which owns the park.

The Council is creating new leisure and cultural centres in the park at the cost of around £20 million.

Planning permission for the spoil project was obtained earlier this year while environmental tests confirmed it was free of asbestos or other contaminants and suitable for reuse.

The spoil has been safely stored on site while preparation work for the contouring was undertaken.

I am delighted that this is now underway as it is an initiative with a double purpose in terms of environmental sustainability and improvements to the outdoor leisure activities in the park.

We are reusing a huge amount of material that would otherwise be wasted in landfill and we will be carrying out much-needed levelling work on a football pitch where other events are sometimes held.

There will also be a significant reduction in construction traffic that will result from relocating this spoil within the park itself and is a further demonstration of our commitment to improve the environment.

The improved football pitch together with the impressive new leisure and cultural centres we are creating will make Rothamsted Park an even more desirable place to visit and enjoy.

The swimming pool building in the park is being transformed into a state-of-the-art leisure centre.

The nearby sports centre is being converted into a multipurpose cultural centre fit for the 21st century, replacing ageing Harpenden Public Halls in Southdown Road.

It will include a 511-seat theatre, two function rooms, an exhibition space, bars on two floors and a café overlooking the park.

The leisure centre is due to open this winter and the cultural centre is set to open in mid-2021.

Picture: The spoil with the new leisure centre in the background.