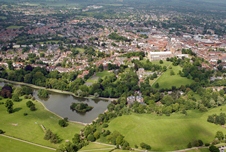 Residents and businesses will be able to view in real time a broadcast of St Albans City and District Council’s Local Plan examination hearing.

The hearing is due to start on Tuesday 21 January and will be transmitted by a webcast on the Council’s website.

It is scheduled to run from then until Thursday 23 January, from Tuesday 4 to Thursday 6 February and Tuesday 11 to Thursday 13 February.

Anyone interested can watch the event as it happens or view a recording at a later date.

The Local Plan for the District identifies land for large-scale future housing, commercial and infrastructure development as well as environmental protection.

A draft was approved by the Full Council in 2018 after an extensive public consultation and is now to be examined by Government-appointed Planning Inspectors.

The Inspectors, Louise Crosby and Elaine Worthington, are to decide if the plan is “sound” in that it meets all legal and procedural requirements.

They will hear evidence from Council officers as well interested parties who have already submitted evidence to the consultation.

The Local Plan is one of the most important tasks the Council undertakes with the examination hearing putting it in the spotlight.

I urge anyone who is interested in the future shape of the District to take a look at the webcast and see the rigorous scrutiny that the Plan is subjected to.

We are very hopeful that our Plan will meet the high standards set and that we will be able to adopt it later this year.

That will be a major turning point for the Council after many years of striving to produce a credible Plan. We will then be in a position to help deliver thousands of much-needed homes in the District as well as the infrastructure, such as new schools and roads, that will be needed to sustain our new communities.

The examination, which is open to the public, is an important part of the Local Plan process and will be held at the Council Chamber in the Civic Centre, St Peter’s Street.

The Inspectors will look at the key issues involved in the Plan and the way it was prepared.

Each session will have a theme with, for example, the Green Belt likely to be discussed on Thursday 23 January.

Organisations and individuals who have submitted representations during the consultation stage can speak if they have requested to do so and the Inspectors allow it.

The draft was drawn up by the Council after extensive consultation with residents, community groups, businesses and neighbouring local authorities.

It was submitted in March last year to the Secretary of State for Housing, Communities and Local Government who appointed the Inspectors.

Eleven sites in the Green Belt to provide some of the new homes and employment centres have been put forward.

The webcast will appear here. For more information about the LP, see: www.stalbans.gov.uk/planning-policy.

Details of the examination and the hearing sessions can be found at www.stalbans.gov.uk/local-plan-examination.