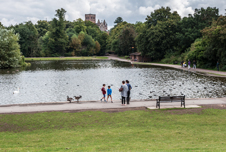 Plans to revitalise the River Ver as it flows through St Albans have received “a highly-positive” reaction from residents and community groups.

Some 74% of those who responded to an online survey support the proposals to improve the rare chalk stream from Verulamium Park to Sopwell Mill Farm.

Feedback from the more than two hundred responses is to be analysed by the team which drew up the proposals.

They will study the many ideas and suggestions that have been put forward and decide if any changes should be made to the scheme.

An initial assessment of the replies indicates there is widespread approval for the plan to return the 2.5 kilometre section of the river to its more natural state.

Only 10% of respondents say they have reservations about the scheme while the other 16% are undecided.

The stretch of the Ver due to be enhanced has been adversely affected by alterations to the river’s natural course that were made many decades ago.

The overall environment, including the wildlife and plants, has suffered as a result. One associated problem is the poor water quality of the park’s artificial lakes.

The Environment Agency has been leading the project with St Albans City and District Council which owns the park. They have been working with other partners.

This is an ambitious and very exciting project that has captured the imagination of people across the District.

The feedback we have received from our engagement with residents and organisations has been highly positive.

There are some concerns raised by people who may be directly affected by the scheme and we will continue to listen to their views and work with them to find solutions.

The main message we are getting, though, is that people want something done to enhance this stretch of river and, in particular, to sort out the historic problems with the park’s lakes.

I’m delighted the community is right behind our efforts to work with the Environment Agency and other partners to deal with these issues. This is a complex, long-term scheme and people do have to be aware that it will take some years to complete.

“This is a really ambitious project, significantly improving Verulamium Park, the water quality of its artificial lakes, and the River Ver through the centre of St Albans.

The response to our draft outline proposals was very helpful. We will listen to the feedback that we received.

We are looking forward to developing the detailed designs and involving the public throughout this process. We are determined to get it right. This is a once- in-a-generation opportunity to improve the river, lakes and park and create an area that residents of St Albans can be proud of, and that will attract more visitors.

Engineering firm AECOM was commissioned to examine options to improve the Ver. They will now report on the feedback findings and finalise the outline plans later this year.

The Revitalising the River project should then move onto the next stage. This will involve commissioning experts to draw up a detailed masterplan.

That task is likely to take a year with the plan then going out to a public consultation while funding is arranged.

Various planning permissions will have to be obtained and it is hoped the work will go ahead in 2019. The whole scheme, which is likely to cost several million pounds, may be completed in 2024.

One group affected by the proposals are allotment holders at Cottonmill. This land is already prone to flooding and if left alone, the central area is likely to become submerged most years for, potentially, months at a time.

The plan to restore the river to its natural path in this area will secure the future of many of the threatened allotments. It will also allow for the creation of a new wetlands area.

Some allotment holders may have to be relocated with the Council guaranteeing that every one of them will be assigned a plot.

Chalk streams are regarded as very rare as there are only around 200 in the world with about 85% of them in England.

One of the main features is that their source is groundwater from the chalk bedrock rather than rainwater. Streams should have crystal clear water flowing over clean gravel, attracting a wide variety of wildlife.

More information is available on the Council’s website on: https://www.stalbans.gov.uk/revitalising-river-ver