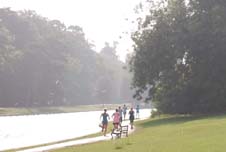 An ambitious project to return the River Ver to its more natural state as it runs through the centre of St Albans has been launched.

The plan will include significant enhancements to Verulamium Park and the water quality of its artificial lakes.

Major improvements will also be made to the surrounding wildlife and landscape including the creation of accessible wetlands teeming with birds, fish and insects as well as plants.

The Environment Agency has been working on the plan along with St Albans City and District Council, which owns the park, and other partners.

Nearby residents and interested organisations are to be told in detail about the project and asked for their views.

Initial work is due to start in 2019 once the precise cost – likely to be a seven-figure sum – is established. It will take several years to complete with funding expected to come from several sources.

The main aim is to improve a 2.5 kilometre section of the rare chalk stream that flows through the park to Sopwell Mill Farm.

This stretch is currently affected by a number of alterations to the river’s natural course that were made many decades ago. These have had an adverse impact on the surrounding environment.

Classic chalk stream features will be restored to improve the habitat and better support wildlife.

This will involve narrowing the Ver at some points after it enters the park to improve the flow, and create riffles, pools and meanders. The gravel bed will be naturally cleared of silt.

The river’s concrete banks will be dismantled and replaced by soil, grasses and plants.

More natural light will be allowed to reach the river, which is currently heavily shaded, by trimming trees. This will allow chalk stream plants and fish to thrive.

Another major development will see part of the chalk stream follow its more natural course after it passes the gardens of St Michael’s Manor. It will sweep down to the lower ground with the larger of the two lakes being reshaped to make room for it.

There will continue to be a flow down the existing artificial channel in front of the Fighting Cocks pub. This section, built to serve an old mill and allow fish to pass, will be dramatically improved.

The park’s artificial lakes – built in the 1930s - have become heavily-silted, reducing the water quality and causing unsightly algal blooms in the summer months.

A number of improvements will be made and include a slight increase to the flow from the Ver into the lakes to freshen the water.

The smaller lake will continue to be available for model boating with a new launch area provided.

Both of the lakes’ edges will be fringed with native plants to provide a home for a rich diversity of wildlife and to soften the borders.

A wetlands area will be created at the south-west corner of the large lake which will support many different colourful plants and animals.

Boardwalks will be installed to allow people to explore this rich environment and get close to nature in all its beauty.

The planting around the lakes’ borders will further improve water quality and discourage excessive numbers of Canada Geese. Droppings from these non-native birds are partly responsible for the poor water quality.

Sediment which has built up in the bottom of the lakes will be used to provide fertile material for the new planting areas.

This will also enhance the water quality and depth of the lakes, reducing algal blooms. To help further, carp will be removed and replaced with native fish like rudd and perch.

In another initiative, the main islands on the larger lake will be extended and raised to create better conditions for herons.

In the events meadow further south, it is planned to create two more wetlands with boardwalks.

Further downstream, a change to the course of the River Ver as it reaches the Cottonmill allotments is planned.

It will be restored to its natural path which will take it through the centre of the allotment area that is already prone to flooding. Another stunning wetlands and recreational area will be created at this spot.

Discussions with allotment owners have already started and the Council will provide anyone who loses their plot to the Ver with a suitable replacement.

We have been working flat out behind the scenes with the Environment Agency and other partners on this exciting and transformational project.

The condition of the two lakes is a major local issue and we have been determined to find a comprehensive, long-term solution that will revitalise that area of the park. This project will do all of that and more.

The Ver will be allowed to take a more natural course, the lakes will be freshened up, wildlife will be better supported and fabulous new wetlands will be created.

Verulamium Park is already a major visitor attraction and this will make it even more popular in the years ahead as there will be so much more to enjoy and discover.

We are also committed to engage with the allotment holders and nearby residents who may be affected by the changes. We will explain everything in detail to them to win their support for the scheme.

This exciting and ambitious project is part of a wider programme that aims to protect and restore rare chalk streams, such as the River Ver.

The Environment Agency is overseeing numerous river restoration projects, alongside partners, that reinstate natural habitats and improve the flow in our rivers.

Revitalising the River Ver will allow St Albans residents and visitors to better appreciate nature - right in the middle of the City.

We are confident that the combination of measures we propose will improve Verulamium Park and create a better place for people and wildlife.

In the coming weeks and months we will be engaging with the public and stakeholders to help shape and develop these plans.

We are delighted with the ambitious proposals to improve 2.5 kilometres of the River Ver –one of the globally very rare chalk streams which we are privileged to have locally and must protect.

We believe that these plans will help towards our society achieving its long term aims for the river.

We are also very supportive of the plans to finally address the issues with the Verulamium Park lakes. These lakes and the River Ver are tremendous assets for St Albans but at the moment both are suffering.

These plans represent a once in a generation opportunity to create a park and a river area that the people of St Albans can appreciate and be proud of and enjoy for years to come. We are looking forward to helping shape and develop the plans.

Chalk streams are regarded as rare as there are only around 200 in the world with about 85% of them in England.

One of the main features is that their source is groundwater from the chalk bedrock rather than rainwater. Streams should have crystal clear water flowing over clean gravel, attracting an astonishing variety of wildlife.

As part of a wider programme to protect and restore chalk streams, Affinity Water is reducing the amount of water they abstract from groundwater sources near St Albans.

The scheme is based on a feasibility study commissioned from consultants AECOM which examined various options.

More information is available on the Council’s website on: https://www.stalbans.gov.uk/revitalising-river-ver#:~:text=The%20River%20Ver%20in%20St,diversity%20of%20habitats%20and%20wildlife.