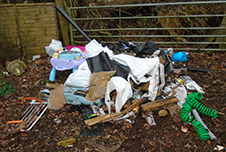 St Albans City and District Council is supporting a County wide campaign aimed at helping to reduce the number of fly tipping incidents across Hertfordshire.

The campaign asks people to help prevent fly tipping by taking steps to ensure that their waste is disposed of correctly.

The campaign launched this week and is organised by the Hertfordshire Fly Tipping Group (FTG).

It encourages Hertfordshire’s residents and businesses to follow the campaign’s S.C.R.A.P. code. This provides a checklist to follow when arranging one-off collections of waste:

We are asking people arranging one-off collections of waste to follow this checklist to prevent their waste being fly tipped and causing an ugly blot on the landscape.

Fly tips, however, are not just limited to piles of rubble, old baths, kitchen cupboards, fridges and items of household waste dumped at the roadside. Fly tips also extend to household waste left next to a litter bin or outside a charity shop.

Everyone has a legal duty of care to dispose of their waste responsibly. If people fail to take steps to ensure their waste is disposed of legitimately, and it’s later found in a fly tip, they could end up being prosecuted or fined.

Analysis and research shows that approximately two thirds of the fly tipping  incidents reported each year are as a result of normal household waste that has ‘leaked’ from established waste disposal routes.

Leaving waste items on the street for others to take, outside charity shops and next to street litter bins are all examples of fly tipping. These contribute to the thousands of fly tipping incidents reported in Hertfordshire each year and in 2016/17, cost tax payers over £1 million to clean up and investigate.

Since April 2017, 35 people have been prosecuted for fly tipping offences in Hertfordshire and over 100 fixed penalty notices worth £300 have been issued.

The public has a duty of care to ensure that their waste is disposed of responsibly and failure to do so could result in an unlimited fine.

It’s important that residents and businesses carry out the necessary checks to ensure contractors are properly licensed so they don’t end up in court being prosecuted for fly tipping.

This year I have committed over £50,000 of funding to help local authorities tackle fly tipping across the County. This grant will be used to cover a wide range of initiatives, including the purchase of new CCTV cameras for use at fly tipping hotspots and resources to educate residents about their duty of care when disposing of waste.

Fly tipping is a serious concern which can blight our communities across Hertfordshire. I therefore welcome the launch of this campaign as it is very important the public is more aware about its responsibilities when disposing of waste.

It is surprising to see how much fly tipped waste comes from normal households - remember we all have an obligation to dispose of our waste responsibly.

The police will continue to work alongside local authorities and will not hesitate to use our resources and skills to help prosecute serious and serial fly tippers.

The campaign will also be reminding Hertfordshire residents that if they see fly tipping in progress they should call 999 immediately, as well as report the incident to the local council at https://www.hertfordshire.gov.uk/services/recycling-waste-and-environment/recycling-and-waste/wasteaware-campaigns/lets-scrap-fly-tipping.aspxThey should make a note of the vehicle registration number and take photos if possible, but do not approach the fly-tippers.

Fly-tipped waste found in St Albans District can be reported to St Albans City and District Council by emailing wastemanagementservices@stalbans.gov.uk or calling 01727 809019. More information about the ‘duty of care’ to dispose of waste and fly-tipping is available on our website.

Local Borough and District Councils can also give help and advice to residents who may be unsure of how to arrange for their waste disposal needs.

Residents wanting to dispose of bulky waste, can take it to a Household Waste Recycling site or book a special refuse collection online or by calling 01727 809019.

The Hertfordshire Fly Tipping Group (FTG) is a multi-agency taskforce including Borough and District Councils and County Council, as well as the Police, Office of the Police and Crime Commissioner, Herts Fire & Rescue, the Environment Agency, the National Farmers Union and Keep Britain Tidy.

The FTG has come together to improve how Hertfordshire responds to fly tipping. The on-going work programme is resulting in improvements in enforcement capability across the county as well as the rollout of new technology to assist in identifying and prosecuting fly tippers.

Above: Photo of a fly tip at Barley Mow Lane. 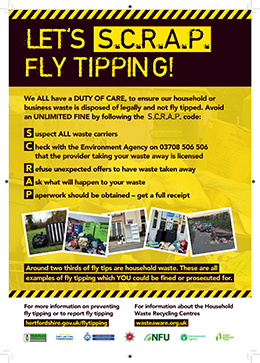 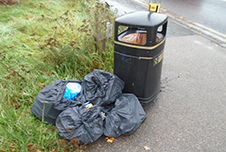