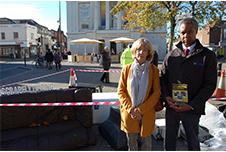 Shoppers and workers were stopped in their tracks today by a fly-tip staged in St Albans City centre as part of the Let’s S.C.R.A.P. fly-tipping campaign.

Waste was ‘dumped’ in St Peter’s Street to raise awareness of the legal duty of residents and businesses to dispose of their waste properly.

If people fail to take steps to ensure their waste is properly disposed of, and it’s later found in a fly-tip, they could end up being prosecuted or fined.

To avoid this, the campaign asks everyone to follow the S.C.R.A.P fly-tipping checklist and to use an authorised waste carrier when arranging one-off collections of waste.

In addition, it reminds people that dumping bags of household waste outside a charity shop, next to a bin or alongside a recycling bank is also fly-tipping.

If it’s your waste, it’s your responsibility to dispose of it properly. Help us reduce fly-tipping and follow the S.C.R.A.P fly-tipping checklist if you are having a clear out. If you are hiring someone to take your rubbish away, make sure they are registered.

Alternatively, you can take excess waste to a Household Waste Recycling Centre or book a special collection with the Council.

Alternatively, residents can take bulky waste to a Household Waste Recycling site or book a special refuse collection online or by calling 01727 809019.

Thousands of fly-tipping incidents are reported in Hertfordshire each year, and in 2016/17, cost tax payers over £1 million to clean up and investigate.

Anyone seeing fly-tipping in progress should call 999 immediately as well as report it to their council. Make a note of the vehicle registration number and take photos, if possible, but do not approach the fly-tippers.

Fly-tipped waste found in St Albans District can be reported to St Albans City and District Council by emailing wastemanagementservices@stalbans.gov.uk, calling 01727 809019 or via a MyStAlbans account. More information about the ‘duty of care’ to dispose of waste and fly-tipping is available on our website.

The Council will prosecute for fly-tipping offences where there is sufficient evidence to do so and the fly-tip is substantial. It also has the power to issue Fixed Penalty Notices for specific duty of care breaches, including fly-tipping.

The Let’s S.C.R.A.P fly-tipping campaign is organised by the Hertfordshire Fly Tipping Group (FTG), a multi-agency taskforce working to improve how the County responds to fly tipping.

The Let’s S.C.R.A.P fly-tipping campaign is organised by the Hertfordshire Fly Tipping Group (FTG), a multi-agency taskforce working to improve how the County responds to fly tipping.

The FTG’s on-going work programme covers improvements in enforcement capability across the county as well as the rollout of new technology to assist in identifying and prosecuting fly tippers.