The Mayor is the elected Chair of the council and is the civic and ceremonial figure head for the council. The chain, badge and robes of office are an outward sign of this high office.

The Mayor is by statute the “First Citizen”, which is an honorary title and means that the Mayor takes precedence over everyone, apart from a member of the Royal Family and the Lord Lieutenant. The Mayor must be non-political and represent every section of the community. Apart from the civic and ceremonial duties and functions that the Mayor performs for the council, he or she also represents the District at all major events and historical ceremonies.

The Mayor has an important role to play in promoting the work of the council and supporting local community, voluntary and charitable organisations, and in celebrating and recognising achievements and milestones.

The Mayor and the Mayor’s Office welcomes your invitations, letters and feedback. Please be aware that the role of Mayor is ceremonial only and carries no decision-making powers. The role is entirely separate to that of elected councilor for their ward. 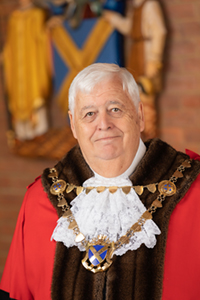 Cllr Harrison, who succeeds Cllr Edgar Hill, has been a District Councillor for 22 years and becomes the City’s 478th Mayor with the first having been appointed in 1553. He has chosen St Albans for Refugees as his charity for the year.

Cllr Harrison, who was Mayor in 2014/15,  has lived in St Albans since 1994 and was a sales engineer before working for supermarkets in various roles.

He has done voluntary work for a number of local organisations including the Centre for Voluntary Service, Pioneer Youth Club and Highfield Park Trust.

In his spare time Cllr Harrison is an active member of the Rotary Club of St Albans Verulamium and the Probus Club.

He was a keen walker and has led tours in Snowdonia, the Lake District, the Scottish Highlands, the Alps and the White Mountains in the USA. He is also a supporter St Albans City FC. 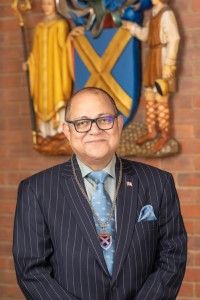 Cllr Abidi was born in Lucknow, Northern India, where he gained an MSc degree in Chemistry before moving abroad.

After settling in the UK, he worked for three decades in various Government departments including the Treasury, Foreign Office and in No 10 Downing Street.

He has held  various overseas postings including an assignment to the UN’s HQ in New York.

Cllr Abidi has lived with his family in Park Street for over 30 years and had a spell as a District Councillor in the 1990s before work commitments required him to stand down. Having taken early retirement, he became a Councillor again in 2019

He is a passionate cricket fan, a member of Middlesex County Cricket Club and follows England as part of the supporters’ group known as the Barmy Army.

We maintain a diary of public events and appointments that have been attended by the Mayor. If you would like to invite the Mayor to an event you are managing, please use our contact form to make your request. Please note that the diary below is no guarantee of the Mayor's availability in the future.

Invite the Mayor to an event Toggle accordion

Please download an invite form or use an eForm

History of the Mayoralty

We have had Mayors for over 450 years since the first Charter in 1553. The first Mayor was a man called John Lockey. Some Mayors have served for less than a year for a variety of reasons such as changes in local government arrangements, the outbreak of war or if they died in office. Other Mayors have served twice or even for three successive years as one mid-Victorian Mayor managed to do.

The Charter also appointed 10 other men (Principal Burgesses) to assist the Mayor in running the City. The Mayor had both Executive and Judicial Roles. They were not elected democratically but were nominated for life by friends and contacts of the other existing Burgesses. The Mayor’s role is no longer Executive or Legal. It is ceremonial and is to represent the City and District Council locally, nationally and indeed internationally at important events.

If you are interested in learning further information, please feel free to read A Brief History of St Albans and Mayoralty below.

The Crest may be taken as allusion to the meeting of the barons in St Albans Abbey prior to Magna Carta. The crest shows a demi figure of a knight armed according to the period concerned and in his left hand he holds a document which has been sealed about Magna Carta. The crest arises from a mural crown – frequently employed to indicate municipal entities of real importance such as Cities.

The Supporters refer to the Abbey by way of having an Abbot in liturgical vestments – with his crozier pointing inwards as is correct for abbatial jurisdiction and wearing a plain mitre as is the custom of Abbots. The other Supporter may be taken as allusion of John the Printer dressed as for the period and holding in his hand an ink-ball – an instrument used in printing. Both supporters stand on a compartment which is divided up in the centre and which has to the left a ploughed field as a reference to the agricultural area contained within the District, and on the other side a cobbled street in reference to the mediaeval City and so the foundations, as it were, of the present City – the compartment is a play on the rural and the metropolitan.

There have been 472 Mayors. These are recorded on vellum rolls and are displayed outside the Council Chamber at the Council Offices in the Civic Centre. Our most recent mayors are detailed below.

We are twinned with several towns.

Exchanges are often organised either by the friendship association for each town, or by schools or voluntary organisations.
The Council of European Municipalities and Regions can provide further information on Town Twinning in Europe and potential funding opportunities.

Alzey is the German twin town of Harpenden. It is a small bustling market town not far from Mainz in the middle of the Rheinhessen wine-producing area. A Wine Festival is held in Alzey in September each year and is very popular. The two towns have been twinned since 1963. The 25th anniversary of the twinning was marked by the planting of an oak tree in Harpenden and the placing of a bench on the Common.

Colney Heath has been twinned with Boissy and St. Yon for several years. Boissy is about twenty miles south of Paris, in the department of Essone. The smaller village of St. Yon is very close by. Both communities are surrounded by arable land, but many of the local residents commute to work. The square in Boissy is dominated by the Maire and contains a large church and several small shops. There are many sports and social activities there, with clubs for all ages including cycling, boules, moving images, Esperanto, twinning and mushroom growing!

The French twin town of Harpenden. It is a market town about forty miles north of Nevers- St. Albans’ French twin- and it is on the same rail link from Paris. Nearby are the wine areas of Sancerre, Pouilly and the latest appellation controle in Cote de Genoux. Cosne is also the center of wine quality testing in the area.

Harpenden has two small roads named after the area- Cosne and Loire Mews, while Cosne has a small amenity area near the center of its town called Jardin d’Harpenden.

The link between the two towns was established in 1998. Fano has an important Roman heritage, which gives it an obvious link with the City and District of St Albans. Fano is a resort town on the east coast of Italy, close to Rimini and Ancona, which have airports for easy access. It has two beautiful beaches and is a fishing port with a colourful harbor.  A Carnival is held over several weekends in February each year, where sweets are thrown from floats to the enthusiastic crowds.

The City & District of St Albans has formed friendship links with the HMS St Albans. On 18th July 2004, the Mayor granted the Freedom of the City to the ship’s company at a special ceremony.

HMS St Albans (F83) is a Type 23 ‘Duke’ Class frigate of the Royal Navy. She was the 16th and final ship of the class and is the sixth ship to honour the Duke of St Albans. She was launched from the BAE Systems yard on the River Clyde in Glasgow, on 6th May 2000.

The link with Nevers was established in 1974. Nevers was chosen as it is a city with physical and historical similarities with St Albans and is in the Burgundy region of France which has a long, ‘historical’, link with Hertfordshire County Council.

Nevers is in the heart of Burgundy and is a cathedral city, with a history dating back to Roman times. It is a place of pilgrimage, being the resting place of St. Bernadette. Nevers is also famous for its distinctive earthenware and glassware and is the venue for the French Grand Prix.

A friendship link was created with Nyíregyháza in 1994, following a decision by the City and District Council to create a link with an Eastern European country following the collapse of the Berlin Wall. The link was upgraded to a full town twinning in 1996.

Nyíregyháza is situated in the north east of Hungary and is the county town of the region. It is not too far from the boarders of Romania and the Ukraine. The name of the town first appears in 1326.

Nyíregyháza is the seventh largest town in Hungary, with a population of about 120,000. It is a town with a large population of young people. The Sóstó spa is a beautiful parkland area with an outdoor country museum and a zoo and receives many visitors each year.

The twinning link between the City and District and Odense began in 1948 when representatives from Odense were invited to attend the St Albans Pageant at the suggestion of Count Scheel, a citizen of Odense who had lived in St Albans for many years. The historical connection between the two cities began when King Canute was said to have taken to Denmark an arm of Saint Alban, who was executed in AD303. There is also a church of St Alban in Odense and a large brewery producing Albani Beer.

Odense is the main town on the island of Funen and is the third largest city in Denmark, with a population of over 170,000 people. It is the birthplace of Hans Christian Andersen. The city celebrated its Millennium in 1988.

There is a friendship link with the Sylhet region of Bangladesh rather than full town twinning. A friendship link is less formal and is community led. The link was established in 1988 when the District Council supported a housing project in Sylhet as part of the International Year of Shelter for the Homeless. Sylhet was chosen because it is the area of origin for the largest ethnic minority group in St Albans.

Sylhet is in the north east of Bangladesh and is the second largest economically prosperous area in the country. There are famous tea gardens connected with Asam and Darjeeling tea. The Mausoleum of Shah Jalal and Shaheed Minar are of historical significance.

Worms lies on the Rhine, south of Frankfurt, and is the oldest city in Germany. With a population now of 80,000, it has a Celtic and Roman heritage, but takes special pride in its medieval history, having been the location for much of the anonymous saga of the Nibelungen. A statue of the legendary Hagen stands on the banks of the river, the treasure held high above his head, before it is hurled into the river. Worms was also the location of the famous Diet in 1521 where Martin Luther defended his doctrines.